Travel through space and time to a dystopian Japan in Shogun of Time! In this future, you will have to battle cyborg samurai warriors and robotic-drones! But, in dystopian Japan, these battles are settled with honour, with a friendly game of free pay by mobile slots!

Shogun of Time is a four reel slot game, with 81 pay lines. This is a collaborative effort between two major online casino developers. These companies are Just For The Win and Microgaming. Will they combine the form a giant titanic power of the iGaming industry, like the Power Ranger's Megazord?

Or will this combined effort be a flub, like when Stevie Wonder collaborated with Blue? (Remember that!?). Read this article and find out! Or, play it yourself, today at Mega Reels.

This game is set in the cyberpunk genre of video games. This began as a subgenre of science fiction. This splintered from the New-Wave science fiction movement of the sixties and seventies. However, the term was coined in the nineteen-eighties by Bruce Bethke, as the title of one of his short stories.

They often depict a dystopian future. In these worlds, huge advancements have been made in technology. However, most of the population reminds in poverty. And, cities are chaotic and disorganised.

Crime rules the streets. Popular cyberpunk films and television shows include Blade Runner, The Matrix and RoboCop. These are hugely popular and widely influential films.

About the Online Slots Game

Shogun of Time free slots online includes a re-spin feature where a 5th reel is added. The free spins feature offers up to 16 free spins that play out on a 5 reel, 243 ways to win set. Stakes start from 10p to £100 per spin on all devices.

The sounds within this game are amazing! The background song is extremely relaxing. It is a modern take on traditional Japanese flute music. The sound effects are futuristic and digital sounding. This takes the game away from the traditional old fashioned slot games.

The visuals within this game are a feast for sore eyes! The graphics are bold and crisp! We loved the digital, futuristic blue and purple design. This backdrop also presents a cyberpunk-style, Japanese city. We loved everything about this design. 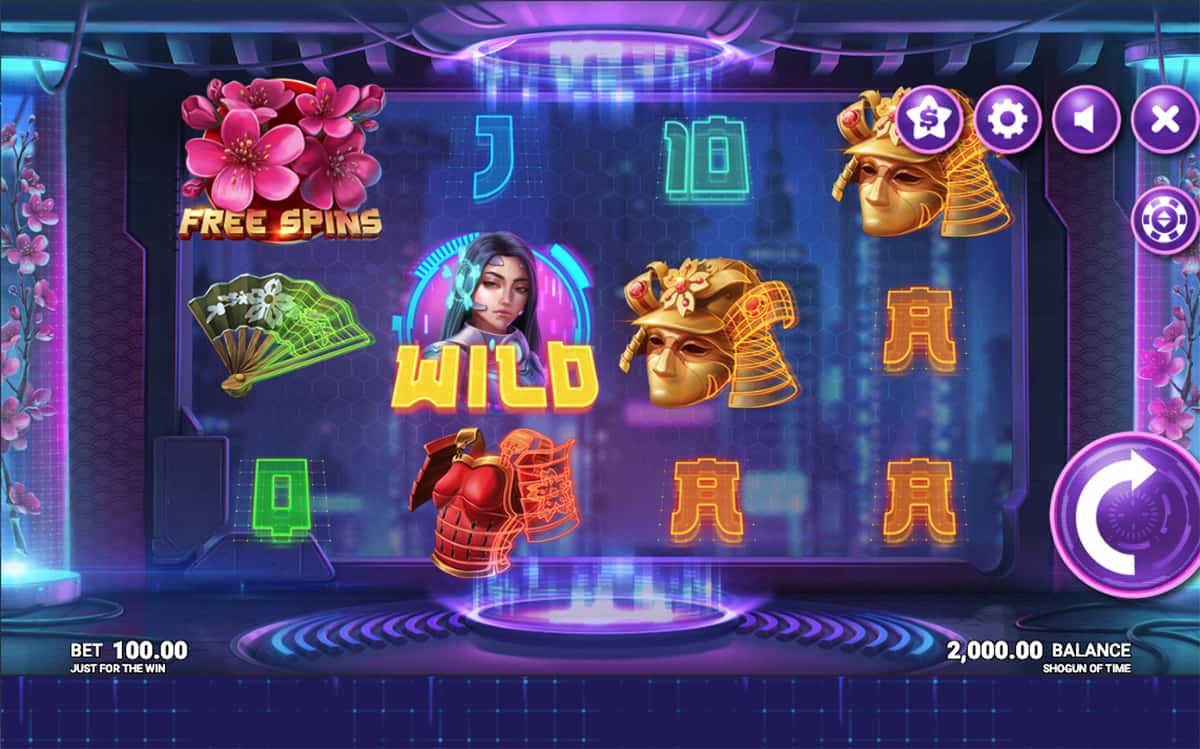 The WILD is represented with a beautiful Japanese cyborg princess warrior. This can replace any other symbol on the reels to produce unique combinations. All, apart from the SCATTER, which is represented by the Shogun of Time Logo and a pot of blossoms. These can help win gigantic rewards!

Reel Split Respins feature is a unique aspect of Shogun of Time. You will not find this feature in many other games. It will randomly trigger when you receive any regular paying, four-of-a-kind combination of symbols. After this, the time-travel portal will open and reels will split and reveal the fifth reel within the middle. Only the added reel will re-spin and allow you to win even more great prizes!

The RTP (return to player) percentage is set at 96.02%. Those give you a brilliant opportunity to win gigantic rewards! We also made use of the fantastic Autoplay feature. This allows you to set 10, 25, 50, or 100 consecutive spins without any interruptions! 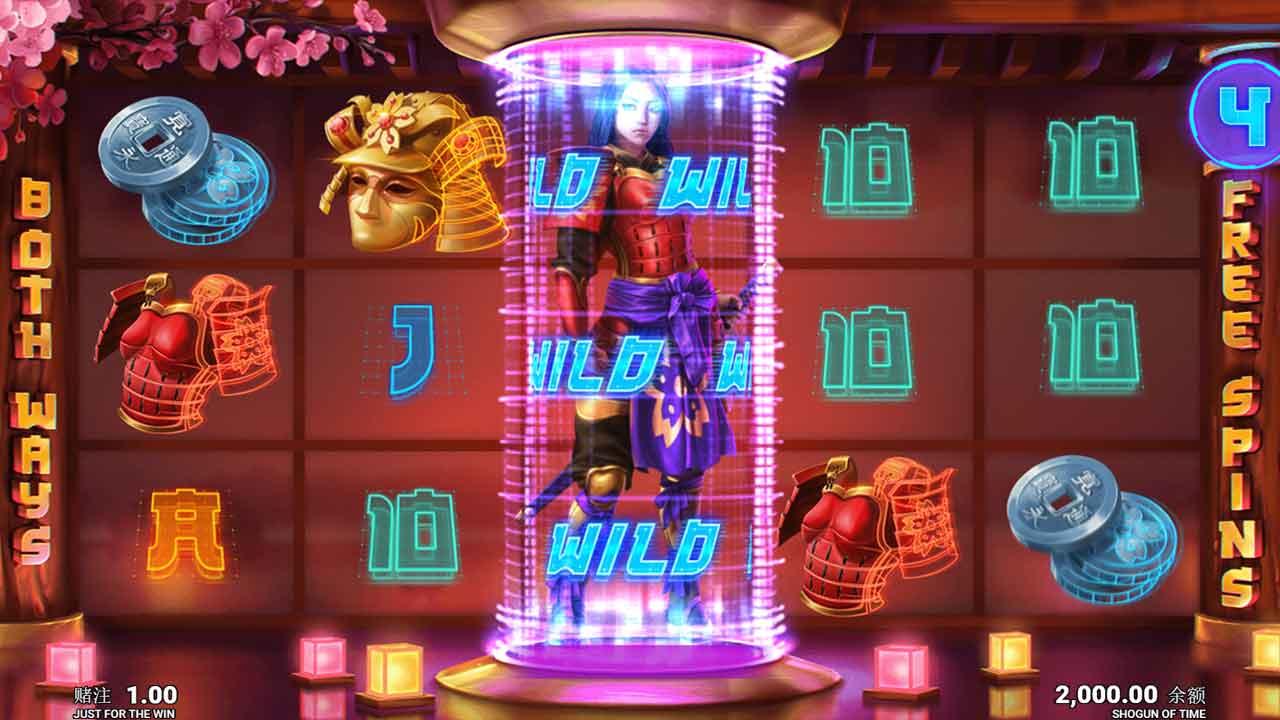 Microgaming is an iGaming software developer. They are one of the oldest and most renowned online casino software suppliers. They began operating in 1994 starting off with the launch of their first online casino- the Gaming Club. The casino still uses the same Microgaming software. They went on to release their Viper software in 2002 which elevated the company even further.

It was all the proof they needed to be able to show their customers and clients that they can provide excel efficient gaming solutions. Microgaming also broke the record in online gaming news for paying out over $100 million worth of progressive jackpot wins in the last 10 years.

Microgaming tends to pay out their wins in one swoop despite the win amount. Other companies tend to pay out their jackpot wins in smaller instalments and over a long period of time. You can enjoy Microgaming slots anywhere on your favourite online casino sites. You can sample some of their most famous games including;

For more games by Microgaming, click this link to find more slot games. 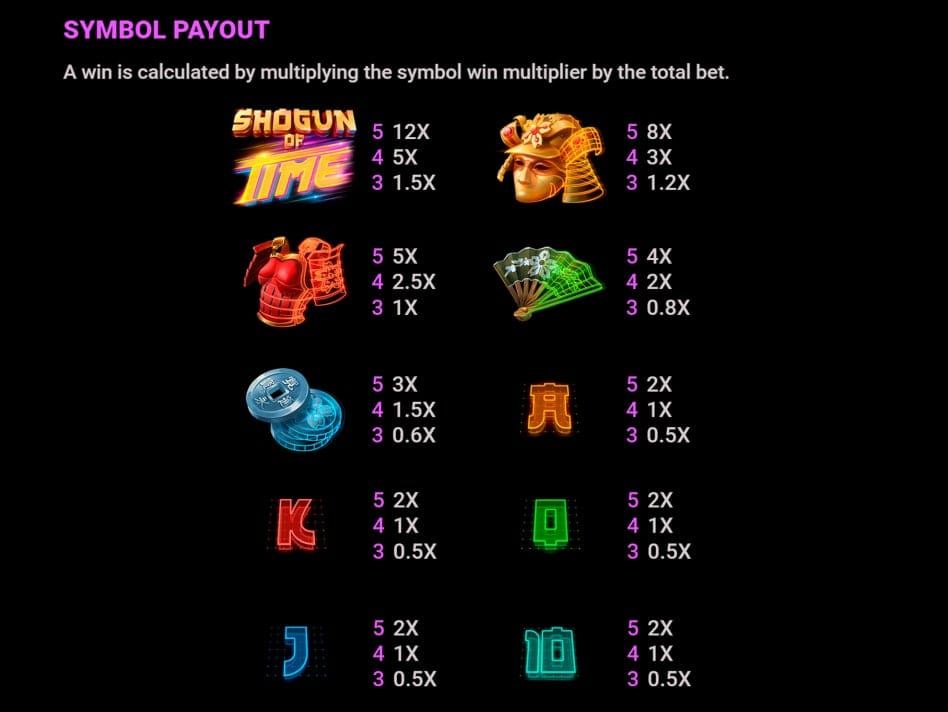 The Verdict on Shogun of Time

Shogun of Time is a fantastic game. Microgaming and Just For The Win have made a combined effort which rivals a bag of fish and chips! We cannot stop playing this great game. Our favourite aspect of the game is the aesthetics.

The sound and visuals complement each other beautifully! But, the gameplay is equally as impressive and even more rewarding. The slot pays out more than 2,700x your total bet on each free spin when the 5 reels and 243 ways to win setup comes into play.

Go ahead and give it a spin to be able to enjoy the unique features. If you liked this game, you may also enjoy Who Wants To Be A Millionaire slot!