Reptoids is a supremely detailed freeslots game on Mega Reel, set in the 1960s around an alien invasion. Almost cinemat-ic in it’s production, symbols are played by several human characters who may or may not be aliens.

Description of the Game

Reptoids has a truly original theme, explored with really good graphics and animations. It’s a 5 reel, 20 pay line slot, with a ‘Repto Detector’ that, when successful, can turn a symbol into a wild.

With some good humour and those high-end graphics, this free casino games has a movie-feel and parts of it feel like something out of Men In Black.

Why you should play this Game

That Repto Detector is a handy tool that can help turn an ordinary spin into a great one should it be successful. Also, rarely is a game so well-designed it terms of graphics and even the loading screen has a captivating feel to it, like you’re about to begin a film.

Add to that a health helping of bonuses, seemingly from out of this world, and you’ve got a fair few reasons to play Reptoids mobile slots. 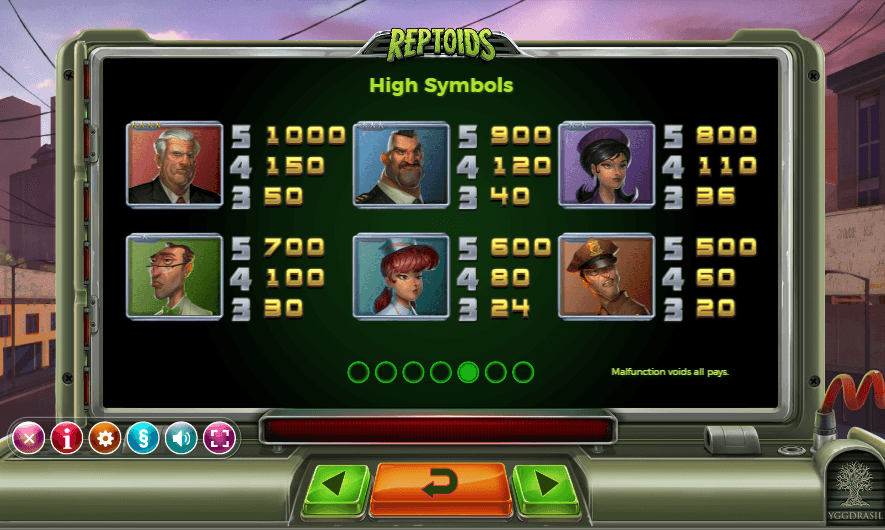 Looking at the Repto Detector a bit deeper, what it does is expose the characters on the reels who are Reptoids taking the shape of a human. With the president among them, you can understand why having these aliens disguised as other characters may cause a problem in the fictional world of Reptoids. Once detected, the symbols will turn wild and swap out for any other symbol bar the scatter, in order to form winning combinations.

On the subject of the gold coin scatter, landing this in the detector frame will trigger the Free Spins feature, a bonus round in which 7 free spins are given to the player. The Repto Detector feature also works here, but uncovered Reptoids will become sticky wilds for the duration of the feature –this means you could end up with plenty of sticky wilds on the reels and plenty of aliens to turn into money.

Yggdrasil have gone all out with this one. The production quality is extremely high and they’ve really thought outside the box to create a captivating onlineslots game. This is something that the developer prides itself on, with their catalogue of games, which you can play now, all holding a high standard of graphics and animations, as well usually being available across all of tablet, phone and laptop.

If aliens are your thing, Space Invaders from Playtech, based on the 1986 film might be a good alternative to this one. Also, Reactoonz from Play ‘N Go has a ‘is there life out there?’ sort of theme too.

As for games with a sense of real depth to their theme and their graphics, Cleopatra stands outas a slot game with similar production quality to this one from Yggdrasil. You've also got the chance to play Reels of Fire slot.