The Great Roman Empire. This once-prosperous empire is the influence behind Centurion, Inspired Gaming's prolific release. You can find this, and many more amazing games at the trusts online casino, Mega Reel. But, is it possible that this game can live up to the high standards set by Inspired Gaming's previous releases? Read this new online slots article and find out.

A Roman soldier walks into a bar and holds up 2 fingers. He says "Five beers, please". After that side-splitting joke, you must be excited to have more Roman-themed fun! The Roman Empire spanned over most of Europe, including England. One of the most successful, rich and powerful empires in the history of humanity. Founded in 753BC by its first king, Romulus. The Romans were great architects and engineers. They built many of the roads and wall that we now take for granted!

Check out our other free slots UK!

Inspired Gaming Group is one of the leading server-based gaming suppliers. They have their online slot games on around 100 websites, internationally. They have over 50,000 gaming machines in operation. These machines are located in more than 30 countries all around the world. The UK based company has offices all around the British Isles and continental Europe with over 10,000 staff operating. To point out the obvious, this is an international company. They develop premium quality online casino slot games. This includes titles like: 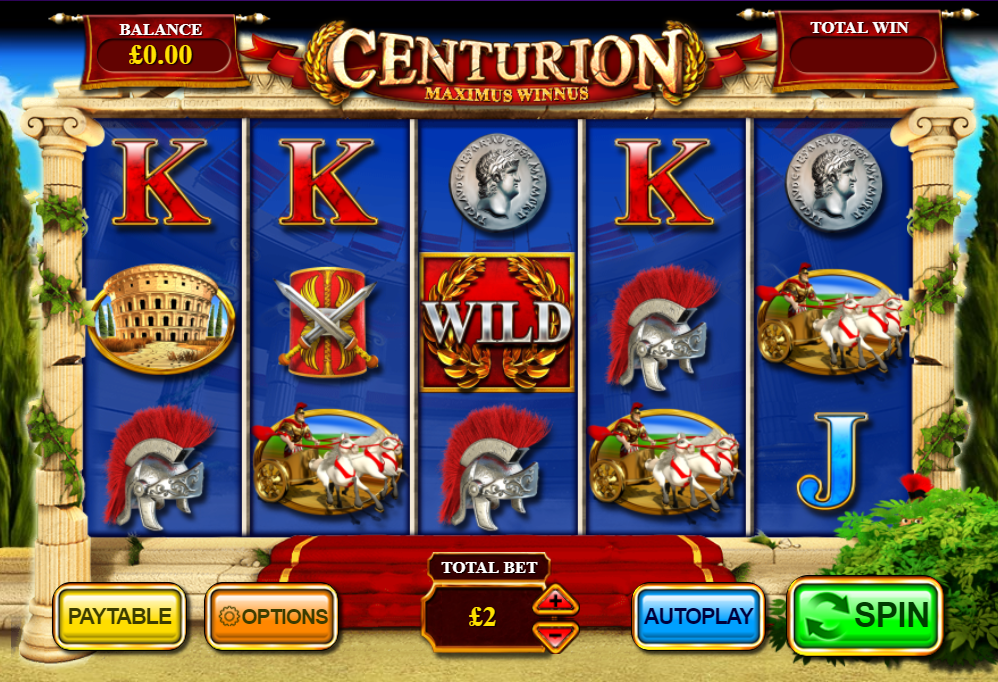 Here the reels spin between the iconic Roman cracked columns on this deposit by phone mobile slot. They sit below a Maximus Winnus banner. You will want to grab your sword and shield and conquer this magnificent game! beautiful blue skies are the backdrop of the lovely white marble columns.

The symbols match the theme perfectly. They are beautifully illustrated. They include a Roman coin, legion shields and swords, and the game logo. However, our favourites have to be the Colosseum, a charioteer and the legion helmet! Lower-paying symbols are the playing cards, but only three. These are the blue Jack, the green Queen, and royal-red King.

Prizes On Parade - In this mini-game, 3 centurions will appear. They will be holding shields which are covered in arrows, multipliers and ‘Collect’.

Caesar’s Free Spins - You’ll need to start by spinning two wheels that will determine the number of spins and multipliers you receive. The spins will then begin.

Road To Rome - In this bonus round, players will need to roll the dice. The numeric value they land on will be the amount they can move their centurion along the board. Your Centurion will go collecting increasingly valuable multipliers along the way. And, the round ends when a specified number of dice rolls have been used up. If you make it to the end, or, land on the central ‘Go To Rome’ square, you will be taken to Rome. Here, a large final reward will be selected at random. How awesome is that? Free rewards and a free holiday.

There are also a few base game modifiers that are worth discussing. These usually occur randomly during the main game whenever the centurion blows his trumpet. Any of these 4 can be activated once that happens: 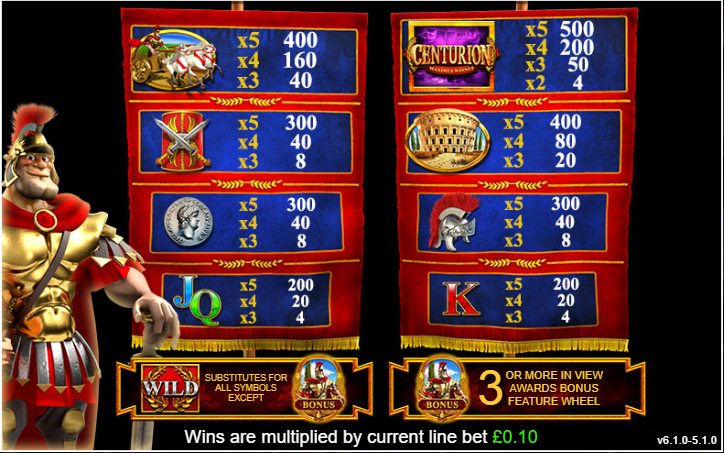 The Verdict on Centurion

We loved this game from start to finish. An excellent visual experience. The cartoon graphics are bold and fun. One of our favourite games of all time. Inspired gaming has really created an instant classic with this release.

There are plenty of awesome bonuses and features in this game which keeps the game interesting. If you enjoyed this game why not also try Cashapillar slot. Be a very hungry Cashapillar and eat through all the fruit to get to those delicious gold coins.