The Aztecs are an ancient culture that were known for their gold and treasures. Do you fancy trying to take some of that wealth from them? If so, you just need to spin the reels in Aztec Gems to try and match up the symbols.

The more matches you make, the more prizes you’ll be able to take from these ancient people in this Mega reel free spins casino slots online. It’s a fast-paced game thanks to its few reels, and the perfect slot for beginner gamers to try out.

About Pragmatic Play the Developers Behind Aztec Gems

Pragmatic Play are a online slots uk games company that has been set up by a bunch of developers who are dedicated gamers themselves. As a result, they know exactly what needs to go into making a great game that will engage and entertain all types of players.

Pragmatic Play may have only been going since 2015 but in that short time they’ve still established themselves as one of the most innovating gaming companies going. Once you’ve tried Aztec Gems, you should give some of their other free slots games, such as Chilli Heat or the sequel to this Aztec slot, the Aztec Gems Deluxe slot, a go! 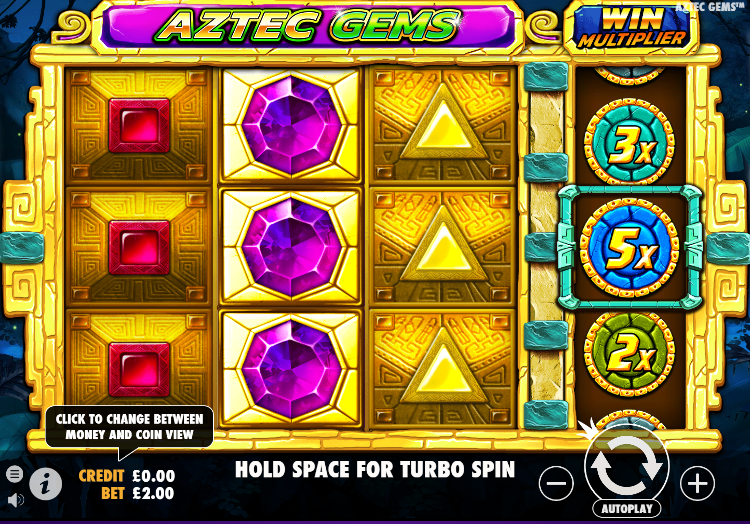 About the Aztec Gems Slots Game

The mobile slots is set in the Amazon jungle. You’ll hear lots of different jungle sounds around you, including exotic bird calls and running water from the waterfalls. You’ll even be able to see the waterfalls in the distance as well as pretty fireflies and rubber plants. In front of this green background, you’ll see the golden game board. It might be a lot smaller than what you are used to as there are only four reels on it. There are five pay lines for you to win on.

All of the symbols on the reels are colourful gems. They each have their own value which will dictate how much you will win for the matches on the pay lines. However, you’ll see that these gems only appear on the first three reels. The fourth one looks completely different with some other symbols.

This is the multiplier reel and its symbols represent different multiplier values. The symbol that lands in the middle of the reel will be what is applied to your original stake and winnings. That’s not all, though, as there are some other symbols that can help you to increase your winnings.

• WILD SYMBOL – Keep your eyes peeled for the golden mask symbol as that is the Wild of the game. It will stack up vertically along the reels whenever it appears on the board. As well as stacking, it can also replace other symbols on the board. When the Wild does show up, you’ll find your winnings will quickly increase. 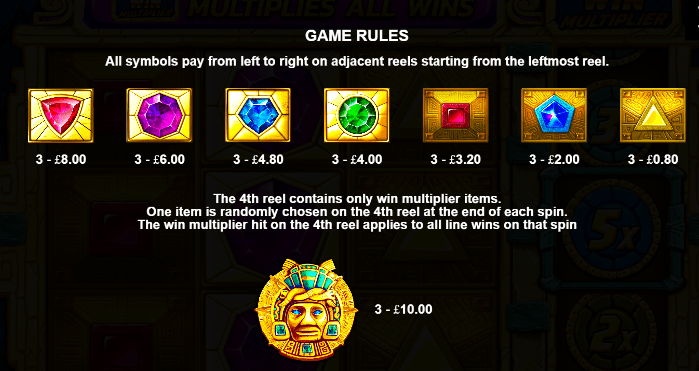 The Verdict on Aztec Gems

Even though you might think that the reduced number of reels on the game board could make the game a bit too simplistic, the addition of the multiplier reel helps to add a few extra thrills to the game play.

The graphics and animation in the game are very sophisticated and help to improve the overall appeal of the game. This is a great game for beginner and experienced gamers alike! If you enjoyed this game, you should try out their other release as well, Aztar Fortunes Slot.