A new release for the daily freespins slots scene, particularly for Mega Reel, Wild Krakatoa online slot by 2by2 Gaming is one you won’t want to miss out on. Enter the world of the Wild Krakatoa as the scene is set with tropical scenery and you’re greeted by a wild woman of the tropics.

With stacked wilds and an epic Krakatoa feature, this slot game is the one for you if you like hedonistic fun. Play to win against the wild backdrop and just hope the volcano doesn’t explode! This Indonesian adventure is a non progressive slot, and offers a high volatility with a decent RTO of 96 per cent.

2by2 Gaming - the Developers of Wild Krakatoa Casino Game

The developers of Wild Krakatoa new pay by mobile slots at Mega Reel, 2by2 Gaming hails from the city of Chicago in the USA. Renowned across the globe, this gaming software company was established in 2015 but has been making huge waves ever since - already the world’s number two in the gaming industry.
Not bad for a new business that is just finding their footing out in the established world of gaming. 2by2 Gaming has not only created the fantastic, fun and fanciful slot game Wild Krakatoa but other popular slot games at Mega Reel too. 2by2 Gaming lead the way for inventing slots with a fantasy twist. 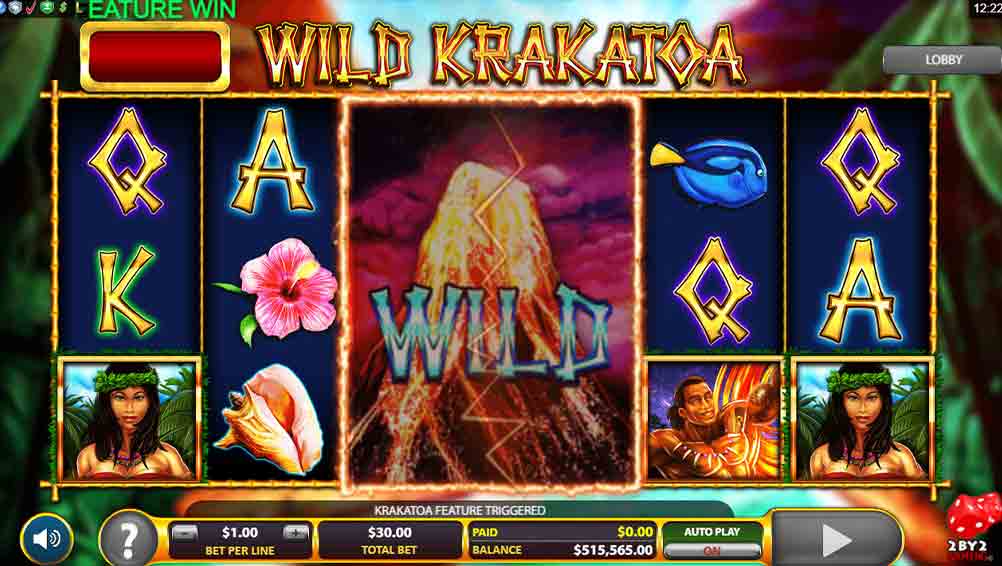 So, what can you expect from an on-line slots game based on the volcanic activity of the most notorious volcano in the world? A fiery gameplay that’s for sure. Of the symbols, look out for a hula dancing girl and Hawaiian fire juggler among many others which can offer some big wins and fun action. This slot game also features the regular playing card low value symbols like most slots do.

With the action you can expect great animation too! Further symbols with Wild Krakatoa include hibiscus flowers, toucans, shells and blue fish. Find all of this across 30 fixed win lines of the grid, with five reels and three rows. There are other symbols to mention too, some of which are more important than others due to their high value.

First off, look out for the volcano symbol which is the wild and this is one you’ll really want to nab as it acts as a substitute for other symbols. In addition, this is the symbol which will trigger another lucrative feature. Also look out for the scattered golden tiki mask which appears on reels two, three and four which unlocks a feature. 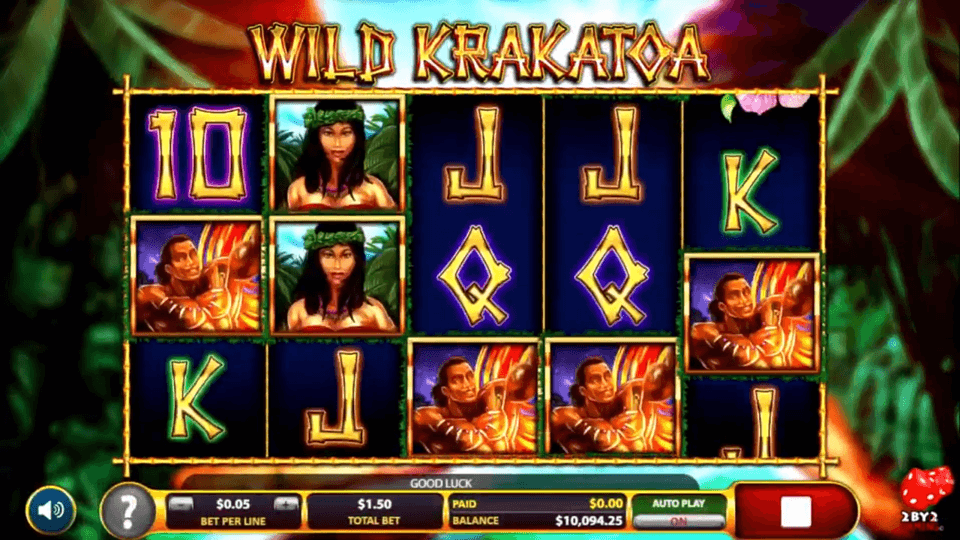 There are a number of bonus features and free spins to play with in Wild Krakatoa at Mega Reel. Observe the sacredness of nature when the wild lands stacked on reel three of the grid, as it’s now when the Krakatoa erupts. This eruption then causes it to split the third reels into two, and expands the grid to a 6x3 layout.

But that’s not all. The reels will then re-spin! So long as the wild keeps appearing anyway, and if a bonus symbol lands, that’s all the better as it will reward a random cash win. If you also manage to collect several tiki pictograms simultaneously, you will then win an epic session of free spins, up to 12 in fact.

While it’s clear to see that Krakatoa doesn’t offer as much as some other slots you can play at Mega Reel, it’s still got a lot. As the grid expands to a 6x3 layout and has 30 fixed win lines while the action continues, wilds landing on reels three and four get sticky. Within the round, the feature can also be re-triggered.

Wild Krakatoa is a brilliant slot game which offers some epic gameplay alongside a fun theme and interesting bonuses. This is a great new release by 2by2 Gaming which in our opinion is well worth a go. Head on over to Mega Reel today and see what you make of it yourself and try the Wicked Dragon Wilds Mega Drop slot.