Valkyrie is a 5 reel, 1, 024 ways to win slot created by Elk Studios with a Norse mythology theme. You'll join fictional character Valkyrie Queen on her quest to find riches. There will be a few obstacles along the way including many battles where you'll fight for destiny. There are lots of exciting features in this slot at Mega Reel including free spins wilds, and large symbols. There are even 3 bonus features where you can win even bigger and better prizes.

Elk Studios is an innovative online casino operator. Combining statistical models with beautiful art makes their games stand out from their competitors. Every Elk Studios slot is designed beautifully and great attention is made to all the small details. They bring their characters to life with stunning animations using the latest algorithms. Thousands of players all around the world enjoy Elk Studios slots. There are slots for everyone ranging from pirate adventure-themed slots like Wild Seas and slots with an oriental theme like Ho Ho Tower. If you liked Valkyrie, why not take a look at these titles? 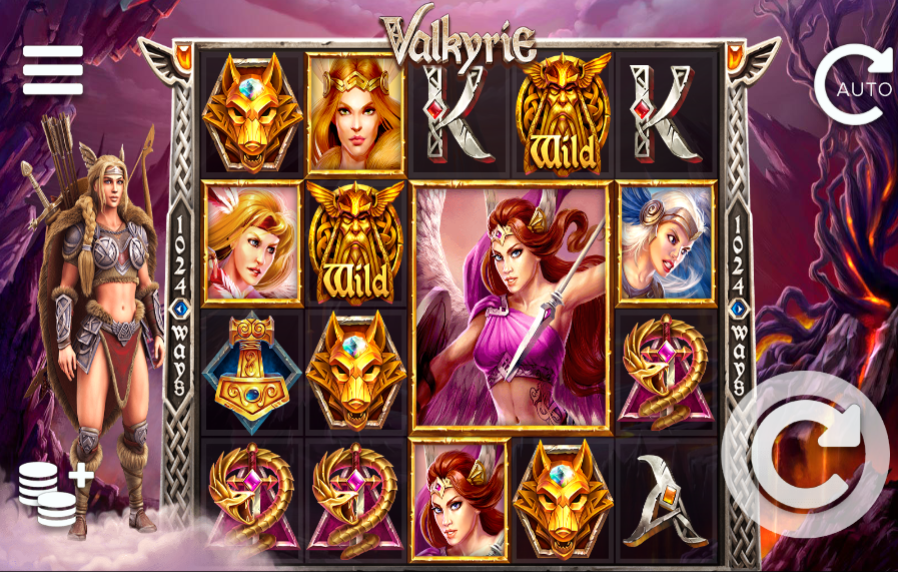 Valkyrie is a Norse mythology-themed slot created by Elk Studios with 5 reels and 1, 024 ways to win. You will join Freya, Andora, Tyrsa, Gane, and Helena on a quest to fulfill destiny in the battlefield of Midgard. You'll partake in many battles which if you win, can lead to many exciting rewards. Behind the reels, you'll find the battlefield of Midgard filled with lots of trees, greenery, and misty mysterious skies. Symbols include standard playing cards including A, K, Q and J as well as Helena, Tyrsa, Andora, Gane, and various weapons.

Valhalla Free Spins Feature - Landing 3, 4 or 5 free spins symbols will unlock the Valhalla free spins feature. Here you will be given 5, 7 or 10 free spins respectively. This feature can be activated several times during gameplay, offering unlimited free spins.

The Shield of the Chance feature - The shield of chance feature is one of the three bonus features in this slot games. Freya will channel Odin's power by lifting up her shield and directing onto the reels. When she does this, the reels will light up and some symbols will change into wild shields.

The Sword of Destiny feature - In this bonus feature, Freya will use her sword. You'll see swords fly across the middle 3 reels and if any hit, they will turn the reel into a wild reel. Up to 3 reels can turn wild during this feature.

The Arrow of Fortune feature - The bow and arrow is the weapon of choice in the arrow of fortune feature. Any symbols hit by an arrow can transform into large 2x2, 2,3 or 3x3 symbols to create fantastic wins. 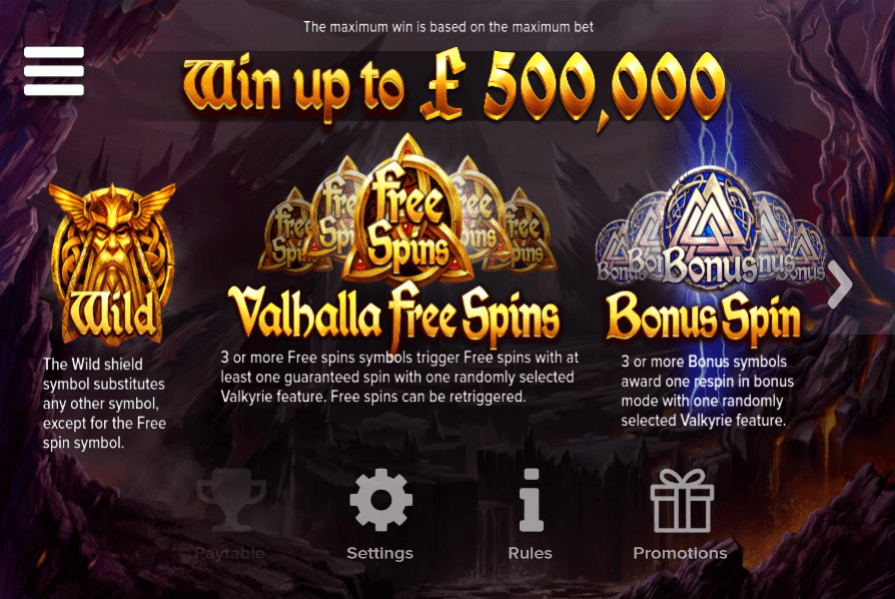 Valkyrie is filled with fun and adventure. It's a highly volatile slot and offers up to 5, 000 your total stake with every spin. The Norse theme is greatly done with magical characters and features filled with weapons. The arrow of fortune feature is perhaps the most exciting as symbols can triple in size to create even bigger wins. If you enjoyed this game, then check out Unicorn Legend slot too!