All for one, one for all! Have you ever wanted to be part of the Three Musketeers? Well, now you can with Three Musketeers, a slot based on the famous trio. Three Musketeers is a 5 reel, 40 payline on-line slots created by Red Tiger Gaming. In this slot, you'll join Athos, Porthos, and Aramis on their mission to fight for what's right.

You'll get to see lots of swashbuckling action in this vibrant and entertaining slot. Become the ultimate duelling master and collect exciting cash rewards as you partake in features including the bar bonus feature, offer bonus feature and the wheel bonus feature.

Three Musketeers is a 5 reel, 40 payline slot with a swashbuckling theme. You'll embark on an exciting adventure defeating evil powers alongside great friends Athos, Porthos and Aramis. The graphics are fun and colourful with lots of foaming tankards of beer and plenty of sword action.

You'll become a true duelling master while you collect great cash prizes along the way. Three Musketeers comes with lots of fantastic features including a bar bonus feature, offer bonus feature and a wheel bonus feature. Click here to discover more with Megareel.

Red Tiger Gaming has been creating entertaining slots since 2014. Their number one goal is to develop slots that all game players around the world can enjoy with ease. Each one of their games include the best HD graphics, incredible music and straightforward gameplay.

Red Tiger Gaming currently offers a selection of around 60 slots, with some of their most popular including Snow White and the 7 Features, Arcade Bomb and Wild Circus. If you liked Three Musketeers, you may also enjoy these titles, which you can play on this free casino games:

-  Tomb Raider Secret of the Sword 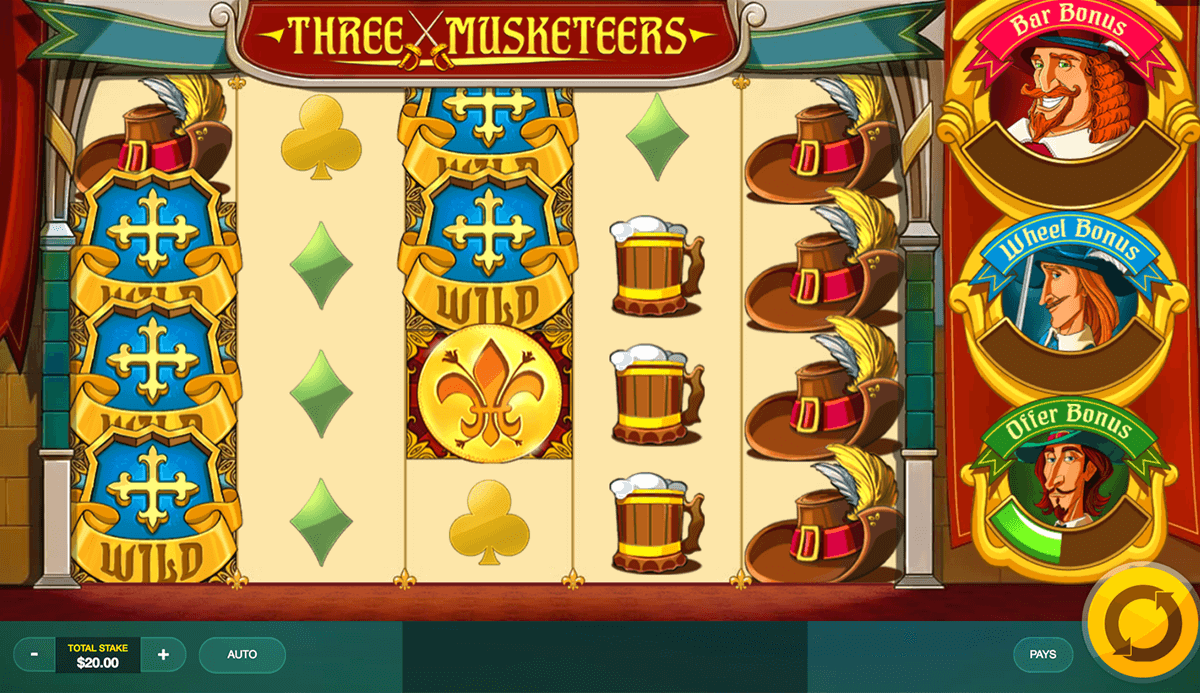 Behind the reels, you'll see the inside of a grand building with turquoise painted walls. The symbols include the standard playing card suit symbols, hats, swords, tankards of beer and a fleur de lis. The Three Musketeers are very active in this game and often shout out french phrases.

Musketeer Meter - Athos, Porthos and Aramis all have their own meter. Every time a musketeer lands, feathers will be thrown at the meter. Depending on where you land, varying amounts of feathers will be added. Once the meter is full, an exciting bonus feature will be activated.

Bar Bonus Feature - The bar bonus feature is Porthos' feature. Choose a symbol from all of the symbols presented to make your way across the board. When you've reached the finish line, you'll get a prize.

Wheel Bonus Feature - The wheel bonus feature is Arasmi's feature. In this feature, all you have to do is spin the wheel. When the wheel stops, you'll be given a multiplier or free spins prize.

Offer Bonus Feature - The offer bonus feature is Athos' feature. In this feature, Athos will ask you to accept or decline cash prizes. Will you accept the right one? 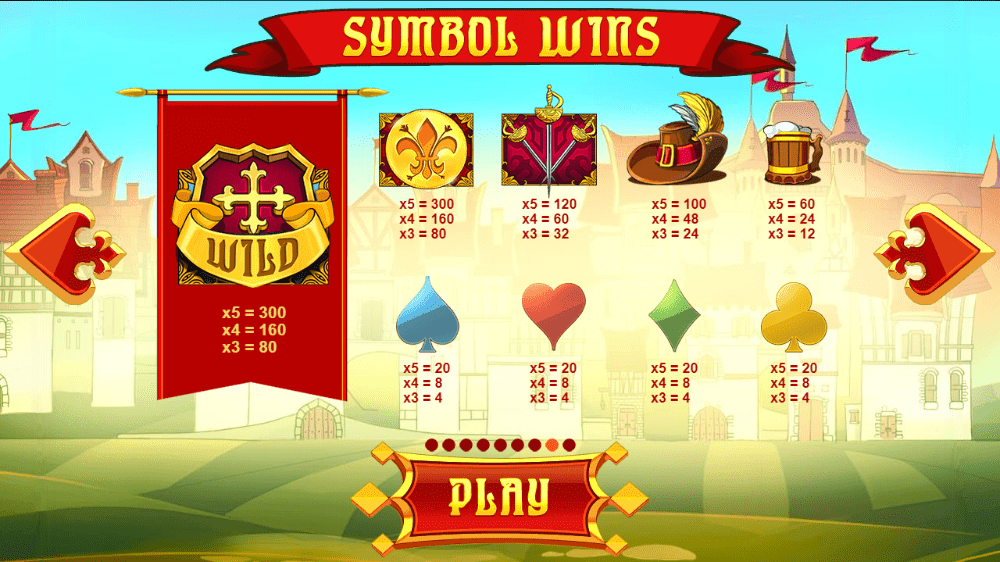 If you're up for a swashbuckling adventure then you will enjoy Three Musketeers. This Red Tiger Gaming slot has a fun theme and the graphics are great. The bonus features provide lots of entertainment and prizes worth up to a 2, 000 multiplier. If you like this, be sure to play The Wiz slot.