Join the jolly joker in Joker’s Jewels slot from Pragmatic Play. It’s bright, it’s colourful and it’s simple. It may not have much in the way of extra features and a creative backstory but it’s a slick and vibrant game for those looking for something a bit simpler. Discover more at Mega Reel free spins casino.

The joker has its rightful place in history commonly referred to as a jester, court jester, or fool. Their role was simply to provide entertainer to the masses during the medieval and Renaissance eras. The role of the joker within this slot game isn’t much different as he is bound to entertain players with such high stakes on the line.

Click to find out more about our online slot games.

About the Joker Figure

The joker was considered a member of the household of a nobleman or a monarch employed to entertain him and his guests. Whist the jester role was to the performer to the common folk at fairs and markets with the end goal of providing joy and laughter. Jesters can still be found today. Although the modern-day entertainers who resemble their historical counterparts will use new and innovative tricks to entertains crowds.

Referring back to Jesters in medieval times, it was frequent for them to have worn brightly coloured clothes and elaborate hats which commonly incorporated a motley pattern. Today’s jesters have continued the traditional fashion by mimic this traditional costume.

The wide variety of skills Jesters use to entertained is primarily through song, music, and storytelling. Alternatively, it’s becoming more common, especially today for a Jester to employed acrobatics, juggling, stand-up comedy, or even imitation, and magic tricks.

Each Jester would be highly skilled in one particular area and would be likely known for his/her unique talent. Regardless of the Jester, the bulk of the entertainment was likely performed in a comic style by including contemporary jokes through words or song about people or events well known to their audiences.

Joker’s Jewels 5-reel mobile casino slot has 5 pay lines which are pack with fun and surprises. The undisputed return to player of 96.50% is no joke regardless of the tile of the game. Jokers have never been the most valuable card in the deck, but this game is here to change your mind. Joining the fun has never been so easy! What’s your excuse for not playing Mega Reel Joker’s Jewels and winning some serious cash?

Spellbinding images and vibrant graphics is what you can expect from this reel. The reels effortlessly outline the profound blues and mauve of the display creating a comforting and tranquil tone. This couldn’t be more perfect as you enjoy spinning and hopefully winning big. 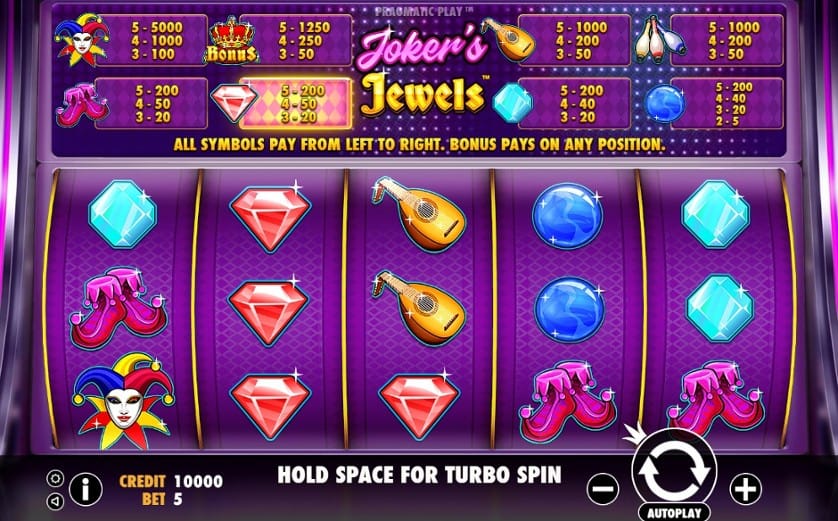 Pragmatic Play is a leading force within the industry, with a presence in 78 countries, games available in 28 languages and a portfolio of over 80 games. Their focus is on creating the most engaging and innovative games they can in as short a time as possible, averaging a speedy 2 new titles a month across multiple platforms.

They also work with some big names such as Mr Green and William Hill. Some of their games include Panther Queen, Chili Heat and Queen of Gold. 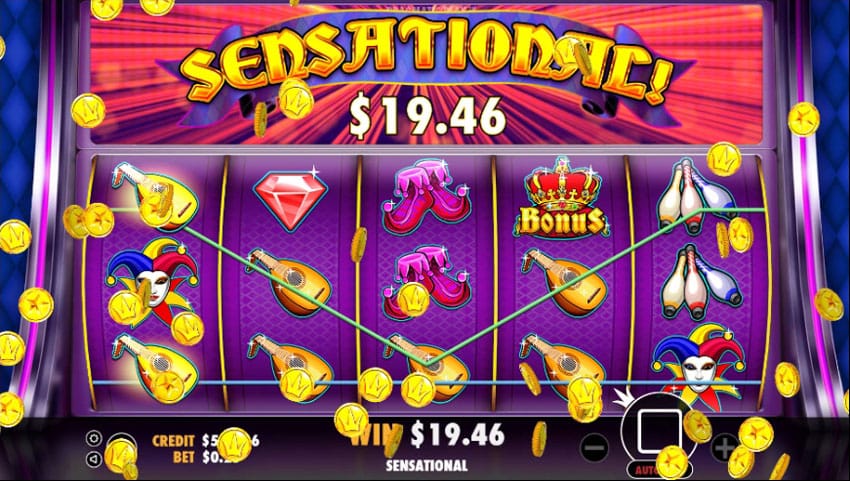 Visually the game is very attractive; bold and colourful it has plenty of golds and reds and pulsing lights. It also has 3D style images which bring it to life. The game has carnival-style music in the background making for a light-hearted and fun experience. There is no exciting back story as such, but this helps keep the focus on the game itself and the rewards it can reap.

The game has very little in the way of features and the main way to score is through simple gameplay alone. However, there is one symbol worth keeping an eye on as this can deliver some extra winnings.

* SCATTER – this is the crown which will offer between 10 and 250x your bet when 3, 4 or 5 of this symbol land on the reels. There are no free spins to be won with this symbol, unlike most games. 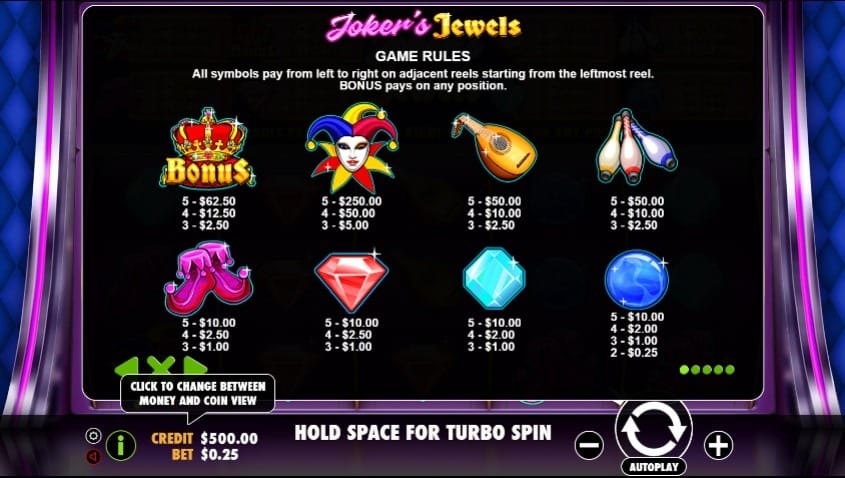 The Verdict on this Online Slot

As you can see, this game is not a feature-packed, animated, thrilling story-based game. Joker’s Jewels is very simple, granted, but it is done stylishly and colourfully and the graphics and music alone make you feel like you are playing something much more sophisticated than a simple slot machine with fruits and basic sound effects.

Pragmatic Play has a reputation for high-quality games, and though this isn’t the most complex of them, it certainly still delivers. Why not also test out Joker Wild Double Up slot?