This online spin slotsgame from Gamevy is a futuristic-style space adventure, which is reminiscent of a more complicated and a lot more engaging version of noughts and crosses. While the game us very graphically simple, it is surprisingly fun to play, and the bright colours and simple shapes are very easy on the eye.

The backdrop to the reels is a simple space scene with stars twinkling out into the cosmos, the audio and sound effects tie in the Sci-fi theme. There are a number of brightly coloured glowing shapes featured, including a green circle, blue square, purple crosses, a white diamond, a red triangle and a yellow star.

Again, these are very simple but there is a classic game to the whole game and its best feature is in simplicity.

We welcomed Gamevy into the free casino games family as recently as 2013, and it has been a love affair ever since. They tend to create games that have something different to offer the player which is perhaps why they have been so popular despite being a newish company, compared to the big veterans of the game.

They have provided some cool and encapsulating online gaming since their inception and it seems that there is no stopping them now as they continue on their online software development journey of success. We are excited to see what more new and exciting games, with that Gamevy twist, that they will come up with next. If you love The Link, check out these Gamevy titles;

This online Slot game, is loosely based on the old favourite school game, noughts and crosses, tic-tac-toe or X͛s and O͛s, as it was commonly referred to. These types of games have been prevalent in human behaviour as far back as ancient Egypt, where similar games were found on roofing tiles which date back to around 1300BCE.

The game played by the Roman Empire in the first century BCE, was called ͚three pebbles at a time.͛ It seems we humans have always been fixated on these kinds of games so it is no wonder this online slot, The Link, is such a crowd favourite.

If you can͛t wait to get started, let͛s take a look at the rules and learn more today;

THE WILD SYMBOL: The wild symbol in this online slot game is represented by the yellow star. And it substitutes for any of the other symbols and can win on multiple lines.

WINNING SYMBOLS: The 5 winning symbols in this online slot game are the green circle, the red triangle, the blue square, the white diamond and the purple cross and all wins are added together. 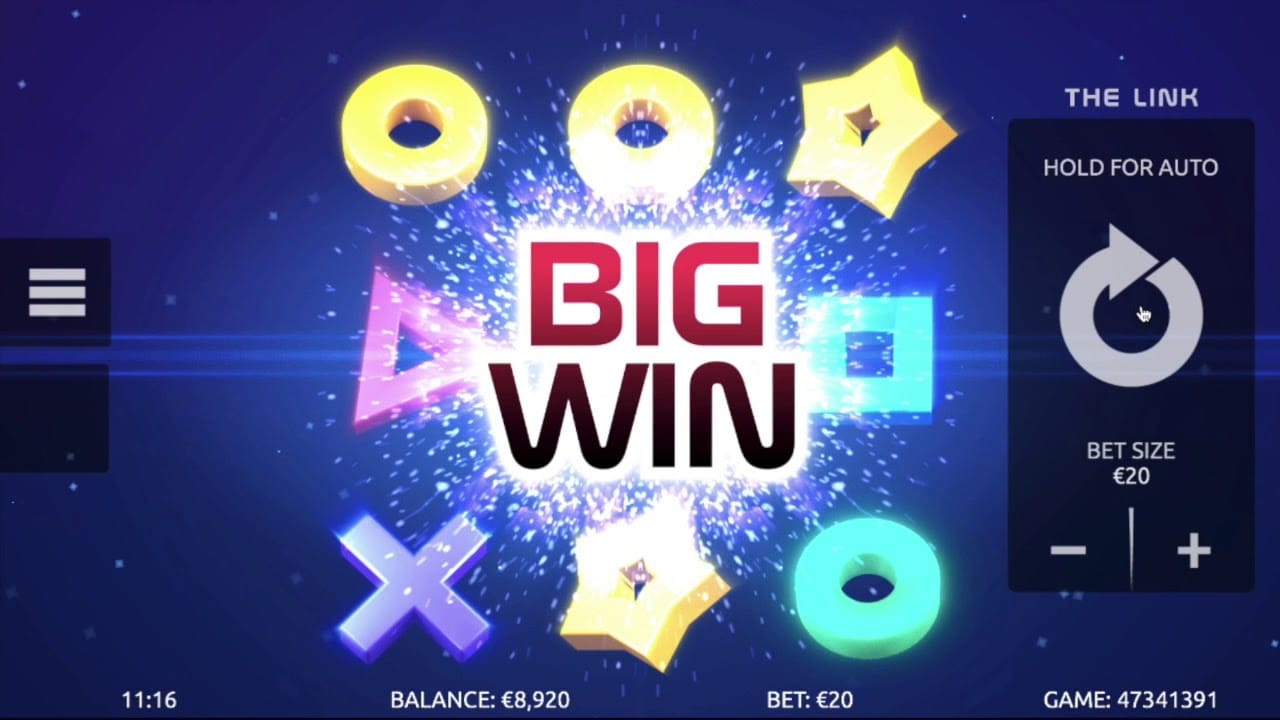 While this Gamevy online slot us very simple in nature with is 3x3 reels, there is something so enjoyable about its gameplay. Perhaps it takes us back to the days of playing noughts and crosses with our friends in school!

The Sci-fi edge they have added to a simple game, jazzes it up just enough to keep it interesting. MegaReel also recommends that you play The Legend of Shangri-La Cluster Pays slot!