Travel back in time to a medieval Celtic land ruled by myth and magic in Eyecon’s simple, delicately designed Enchanted Prince slot game. Drawing on tropes from fairytales, including a magical frog, a beautiful princess and a handsome prince, there are plenty of detailed symbols complimenting this straightforward game. There are 5 reels, 25 paylines, and with the game’s Jackpot feature, winnings are left uncapped so the winner takes all. This game combines the ancient and modern in this prettily illustrated gaming environment with excellent potential for the game’s enchantment to work in players’ favour. Discover more with MegaReel.

Founded in Brisbane, Australia in 1997, Eyecon started out as a computer game company. From there, they developed their most popular game, Gore, which was downloaded millions of times. In 1999, the company dipped its tow into online casino systems and gambling games. This proved to be the company’s strength, as its first slot game, Temple of Isis, is still incredibly popular today. Eyecon aims to create timeless, fun games like its 2006 Fluffy Favourites – still the company’s most popular game to date. Make sure you try Eyecon’s best casino slots games, such as: 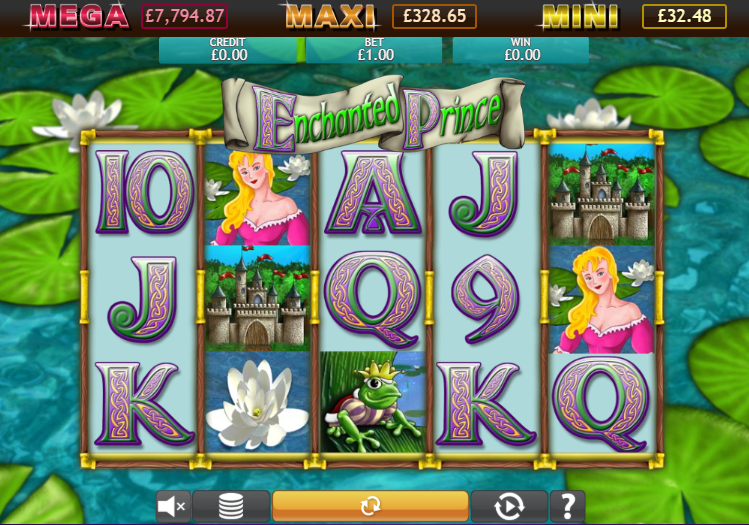 This is a simple slot game with clear, easy to follow gameplay. It has the standard 5 reel, 25 payline format that fans of the game format will recognize. There are bonus rounds and wilds that have the chance to increase winnings and gain free spins. With the game’s Jackpot feature, the top end of potential winnings is uncapped, as the winner takes all from the collective pot of players’ bets.

The most noticeable feature of Enchanted Prince is the detailed Celtic designs on the low value symbols representing playing cards. Against the simple backdrop of a pond or lake with floating lilypads, the design really pops. The higher value symbols include a castle, a lilypad, a white flower blossom and a red gemstone. These can win up to 1800 coins if luck is on your side. The princess symbol, a stereotypical, blond haired illustration, is the highest value. Players can win anywhere from 10 to 2400 coins depending on how many symbols you land at a time. A beautifully decorated crown is the wild, which nets you a double payout if your winning combination includes the symbol. A frog is the scatter, which gives players free spins if you see 3, 4 or 5 frogs on one spin. 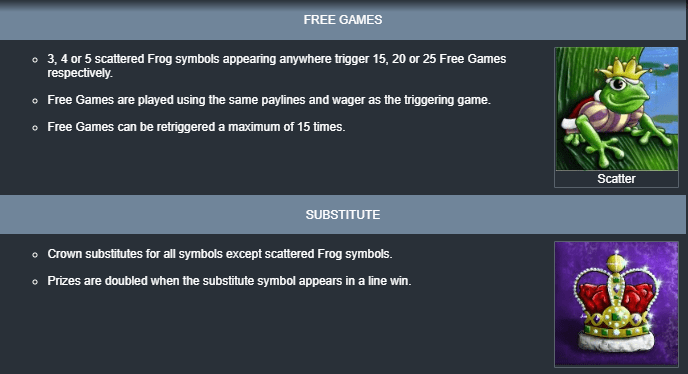 There is plenty of care focused on the design of this game instead of focusing on complex gameplay. The lack of extra features makes this a good way to learn the ropes of slot games. Enchanted Prince has soothing visuals inspired from Celtic fairytales that are lovely to look at without being fussy. Its reminiscent of children’s stories that were read to you as a child, so there’s something familiar and comforting about this game that you don’t get in many other games of the same type. There’s still plenty of scope for to take home some cash, especially as the Jackpot feature allows for uncapped winnings. Why not also try the original Enchanted Prince?