No, this isn’t a pay by mobile casino game based on Elvis – however, don’t be disappointed because this game is about kings, soldiers, and medieval kingdoms, and will take you right into the world of battles.

Endorphina might not be as established as some of the other big names, being founded back in 2010 – however, this iGaming company made big strides immediately, scooping up the title ‘Best Online Slot Developer 2015’ and having two of their big free slots titles coming first and second in the Slot Game of the Year (The Ninja and Satoshi’s Secret, if you’re wondering).

They’ve only continued to move with the same determination, creativity and innovation as they did then – building on their strong portfolio year on year. Click here to find online slots! 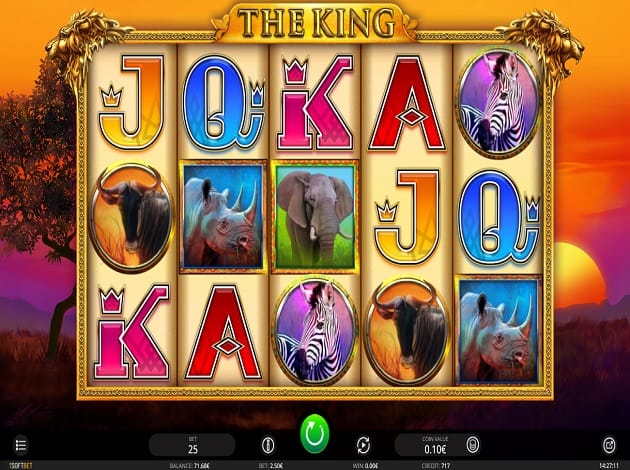 As soon as you start playing, you’ll immediately notice why Endorphina is so well-loved – with the high-quality graphics at Mega Reel, the reels set into the castle wall, and a soundtrack that makes you feel like you’re prepared for battle, the King casino games free ticks all of the boxes.

You’ll also see an array of symbols across the reels: the King and archer are worth the most, both paying out 7500 coins if you match 5 of them. You’ve then got a treasure chest, shield and swords, helmet, and the regular playing card symbols. You’ve also got the lions head and the crown, which act as the wild and the scatter. Land five of the crown and you’ll be awarded with a whopping 9,000 line bet multiplier!

Wild symbol – the crown is the wild and it substitutes for all other symbols on the reels except the scatter to form winning combinations. If the crown contributes to a winning payline, then it’ll also bring with it a 2x multiplier.

Scatter symbol – the lion head is the scatter symbol, and it is the only symbol that is immune to the wild symbol’s powers. This is probably the most valuable of the bunch, as it awards payouts even when it isn’t found on a payline, however when you do find five of them in a spin it’ll pay 500x the value of all bets! This isn’t all the scatter symbol does though, as it also triggers the bonus spins round if you match 3 or more of them in a spin. The lion will activate 15 free spins with a 3x multiplier if you match 3 or more of them.

Ready to risk it all? After every winning spin and every free spins round, you’ll be shown the ‘Take a Risk’ button – which is the gamble round. You could double your winnings by selecting the right card, although it’s not as simple as it looks. You’ve got to pick a card that’s higher than the card that’s shown on the screen.

A thrilling medieval-themed game that follows through with the bonus games to match, King Slot is a great game to play if you’re feeling like you need to do a bit of battle. With free spins, multipliers, high-quality graphics and the wild/scatter symbols, it’s a tidy little casino slot games to play when you’ve got some spare time.

If you enjoyed this one, why not also check out Temple of Iris slot too?