Head deep in to the exotic jungle with Temple Quest Spinfinity; a free slot spins game that promises a mystical adventure with some great prizes. Packed with decent payouts, lots of extra features and enticing graphics, this game will pull you deep in to the Aztec jungle right here at Mega reel.

Based in Australia, Big Time Gaming are made up of true industry experts with over 10 years’ experience in free casino games online. From working in a company later sold to Openbet and a wealth of experience taken from Rockstar Gaming, the minds behind this developer know their stuff.

They have worked with some big names in the industry and are recognised for the innovation, quality and excitement they bring to their phone bill slots games. Check out some of their creations, including their latest and popular Extra Chilli.

This is a 5 reel, 40 payline free slots online game. Bets can be placed from 10p through to £50.00.
Temple Quest Spinfinity plunges you deep into the jungles of South America, with the sounds of macaws and monkeys, along with other indigenous animals. In the background, the rhythmic beat of drums pulls you into the theme of the game.

The graphics are bright and every attention to detail has been thought of; from towering vine-wrapped totem poles and colourful symbols. The animated waterfalls falling down the screen also lifts the scene, allowing for an exciting and fluid play.

There are tonnes of special symbols that award big payouts during the game, which include:

* MEGA ICONS - Living up to its name, these symbols can take up 4x4 block on the reel. They will combine to create some payouts of their own or team up with the wild symbol. Look out for the sword-wielding warrior princess or the golden Aztec shield and the pyramid.

* WILD SYMBOL – this is a obvious symbol, a red square with wild written on it. This high paying symbol will offer up to 375x the payline and will substitute any other icon except for the scatter symbol.

* FREE GAMES - this feature is triggered by the Aztec shield mega icon. The screen will change, so that only reel 1 on the left is remaining, the rest will be opened up to other spinning images. This game is an icon matching exercise; the image on reels 2,3 and 4 need to match up to those on reel 1 to win. It s this feature that earns this slot game its name, as there are multiple combinations to be won which take you to spinfinity.

* MEGA SPINS – the number of spins you win depends on how much of the reel is taken up by the mega image. For example, one square equals one free spin, granting a total of up to 9 free spins. 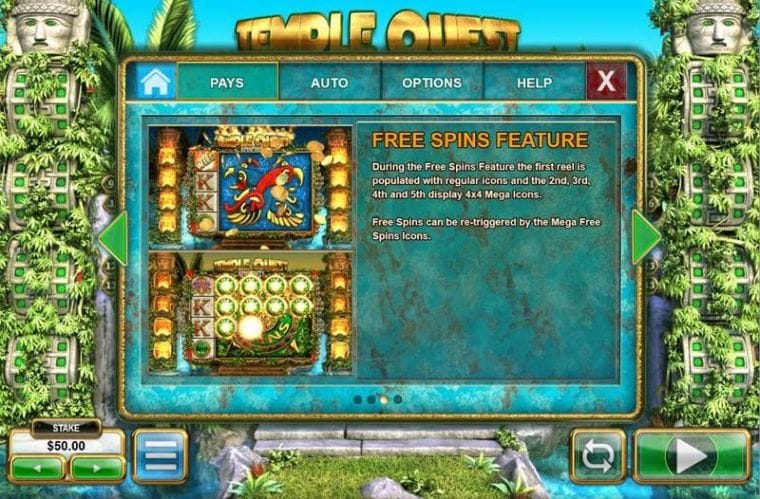 This is a visually arresting game with a great theme that is well presented. Along with some traditional features of slot games such as the wild and free spins, Big Time Gaming adds their own spin and some more excitement with mega icons. Or why not try Temple Of Tut slot?