With the mystery of the pyramids and the legends of tomb raiding and ancient burial grounds, there has always been a sense of adventure about Egypt. Complemented by a gentle Egyptian-inspired soundtrack, Temple of Tut’s cel-shaded appearance continues this legacy, with a hint of exploration in the audio and hidden reveals in the visuals. Go hunting for your own treasure, buried deep behind the spinning reels inside the Temple of Tut right here at Megareel.

Just For The Win develop great gaming content. Their focus is on online and modern slot games for desktop, tablet and mobile. Providing casino games for online casinos around the world, Just For The Win was only formed in 2016 but is already making great strides in the competitive world of iGaming and slots online. 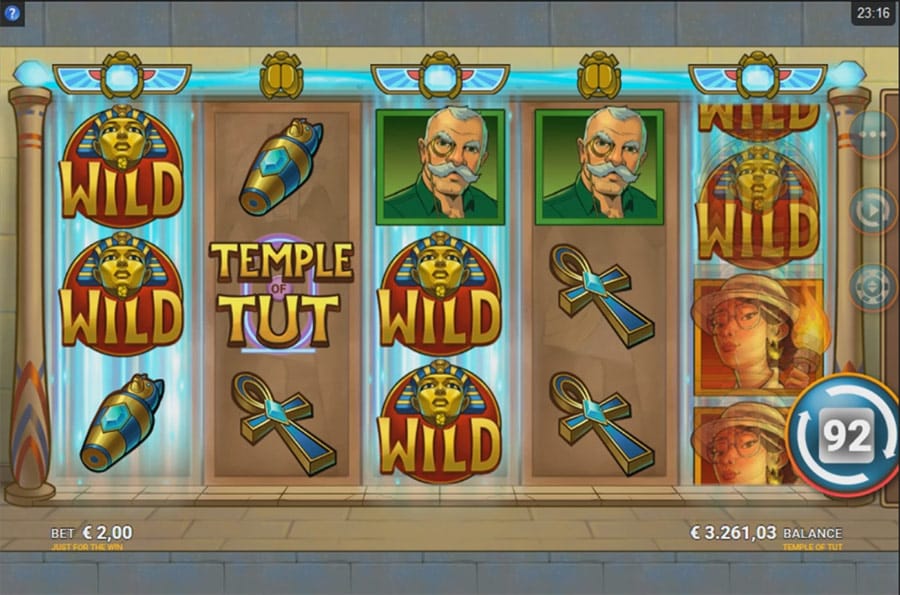 One thing that immediately stands out in this online slot game is the insane bet levels. Bets begin at 10p but can increase incrementally all the way up to £250! Spinning the reels on a £250 stake is sure to find some unlucky adventurers running home to their mummy!

Another clear difference between this and the average slot online is the symbols. Frequently, low level symbols and simply numbers and letters based on a deck of cards. It’s lazy and all too prevalent; here, every symbol ties into the theme beyond dressing up a number ‘10’ with an Egyptian pattern. Good job, Just For The Win!

The low value symbols are objects; a bejewelled canine urn, a blue Ankh, an Egyptian bird symbols with a pair of striking rubies and an eye of Horus necklace. High value symbols are populated by a trio of intrepid explorers; a young cocksure male, an Asian woman with a flame torch and safari hat and an older gentleman, authoritative with his sizable moustache and monocle.

The WILD symbol is King Tut himself. These only appear on super reels which appear randomly throughout the main game, activated by the scarabs at the top of each reel. WILDS are also high-valued.

Lastly, the SCATTER symbol features the title logo, an oddly generic choice given minor innovations seen elsewhere. Hit 3 to 5 of these and be awarded between 8 and 30 free spins. Super reels are activated throughout free spins so WILDS are in play. Even better, further spins can be retriggered by hitting 2 to 5 SCATTER symbols on a free spin.

Choices like this mitigate the rather stingy 10 winning paylines by giving you plenty of opportunity to rack up the cash in the bonus round. 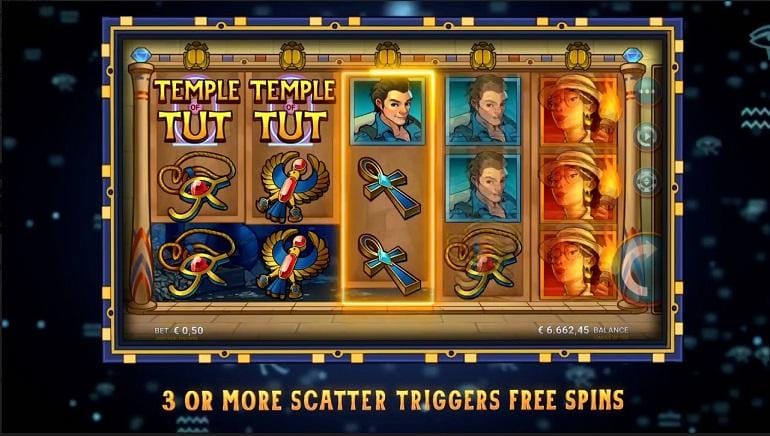 While there’s nothing especially new to the gameplay, the inclusion of super reels is a fun addition with a cool visual flourish while the audio and visuals are impeccable. Given how young Just For The Win are (only 2 years old!), it will be exciting to see where they go in years to come. Already, they are taking baby steps to shake up the rigid rules of online slots and hopefully, they will continue to do so for casino games in general. If you liked Temple of Tut, why not try Temple Of Iris Jackpot?