Slingo games are the mid-point where free spin slots uk meet bingo, and in this version, you'll be visiting the Vikings. Slingo berserk is an online Slingo game from Slingo originals that takes players to the seas with seafarers, and it offers five rows and five paylines. In this Viking-themed casino game, you can expect a 95% RTP and medium volatility.

This is great because a medium variance game is perfect for both big risk-takers and new gamblers. It is only expected of a modern casino game to be mobile-friendly; thus, you can play Slingo berserk on mobile, and the bet range here begins from 2p to £100.

If you haven't heard about Slingo berserk before now, it's because it was only released in May 2020, so it is pretty new. There is a potential Max win of 1000 x, and you can read this review further to find out more about gameplay and how you can strategize. Once you're done, you may proceed to Mega Reels for more free casino games uk.

If you have played other games with a Viking theme, then you will find Slingo Berserk fascinating. Slingo Berserk is loaded with Viking imagery. Some long boats representing four jackpots, helmets, and gold can be spotted around the 5x5 grid. To keep the theme real, lightning strikes presumably from Thor himself, and the background sound is a battle-ready soundtrack that contributes to the atmosphere.  Rain falls non-stop atop the ever-shifting sea.

At the bottom of the reels, we notice the edges of a ship, while far in the distance, there is a mountain that points to land. Lightning strikes brighten up the already darkened sky, making you worried about the storm. Unlike regular slot games, you do not have to look out for symbols and reels here. What is available are 25 balls containing numbers. The ship symbols you will see are there to represent the three different jackpots available in this game.

Slingo original took the time to go all out to create an awesome game, and players can't get enough of it. Other games with the same theme as Slingo Berserk include:

How to play Slingo Berserk Slot

If you wish to on a journey with the Vikings, then you can get on board by visiting Mega Reels to play Slingo Berserk. Here's how you can begin:

To start playing, you need to search through the list of casino games till you find Slingo Berserk. Once you find this game, click on the play arrow and follow these steps for some Slingo fun:

If you've never played Slingo before now, you can use the Slingo Berserk Demo mode for practice before you gamble from your balance, and if the demo version doesn’t impress, then how about you jump back to Mega Reel to try some of the other slingo titles, like the Slingo Cascade slot. 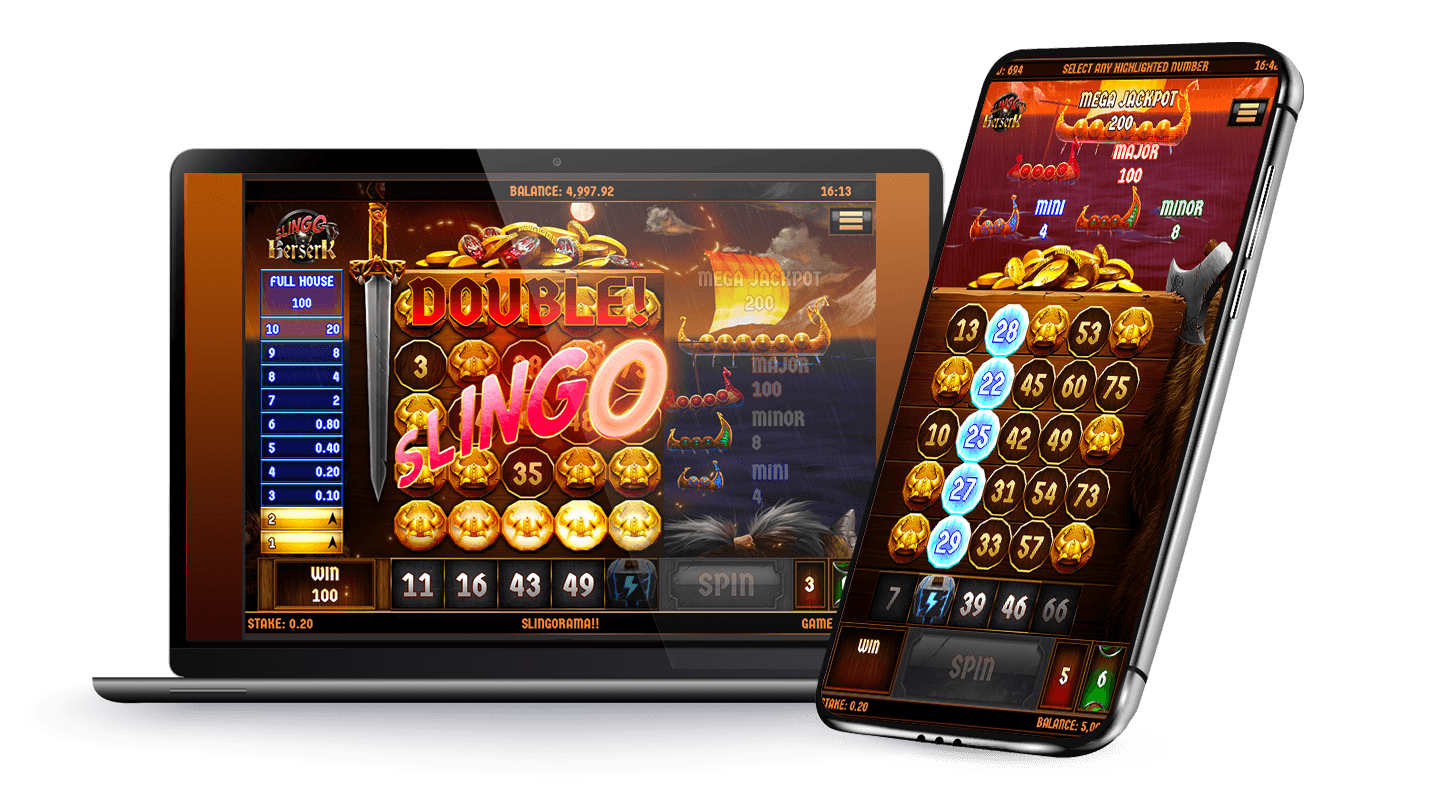 Like regular slots, you need to understand your chosen Slingo game mechanics if you must enjoy your gaming action. To play Slingo Berserk, you can place your stake from 20p to £100. Because this is a Slingo game, there are no reels, just balls arranged in a 5x5 structure. For a Slingo game of Medium variance, a 95% variance is pretty fair, and the max win of 1000x isn't so bad after all.

You will be fascinated to find out that there is a wild icon here even though it's not a slot. There is a free spin feature, jokers or wilds, and a jackpot bonus on offer. With a Viking-theme, Slingo original has done well to bring the old seafarers' wealth to players in this game.

To get the Slingo Berserk statistics more quickly, you can run through the  Statistics table below:

Wild/Joker: This bonus feature lets you mark off any number above the Joker icon. Whenever the wild appears, a gold coin will jump into the treasure chest to offer you a chance to trigger the game's Jackpot round.

Slingo Berserk Free Spins: When you trigger this feature, you will be allowed to play some free rounds.

Jackpot Bonus: There are three different Jackpot bonuses that you can trigger. When you select from the coins that are presented to you, you can reveal either a Mini, Minor, Mega, or Major symbols. Hopefully, you trigger three of any of the jackpot symbols, and you will be awarded a Jackpot amount.

Verdict on this Slot

Slingo games are not listed amongst the most famous casino offerings that you can find wherever you choose to play. However, with games like Sliingo Berserk, players may begin to pick an interest in this unique casino game. One of the recommended ways to enjoy this game is to have an open mind and pay less attention to the 95% RTP.

There are interesting bonus features that won't make you miss playing slot games, and that's fantastic. This casino game is rated 7 for its design and uniqueness. Find Slingo Berserk and more Slingo games on Mega Reel. But if you are looking for more traditional slots, then check out the Shaman’s Dream 2 slot.