If you are constantly daydreaming of hot, sandy paradises, then you might to spend some time playing The Sand Princess. It’s set out in the desert where you will be able to have your fill of heat and sand!

Taking their inspiration from many different Arabian legends, the developers at 2 By2 Gaming have created this enigmatic free spins slot game that plunges you straight into the heart of Middle Eastern mythology. Find more from them at Megareel. Will you have what it takes to take on The Sand Princess and win her gold?

2 By2 Gaming boast an enormous back catalogue of casino slot games and have been able to establish themselves as one of the most hard-working teams in the business. They currently still have a large number of pending patents that are waiting to be brought out onto the market!

Known for their innovative design flair, all of their slots are based on some very gripping themes. By the time you’ve taken on The Sand Princess, you’ll want to turn your attention to their other slots, like Cosmic Invaders and Dreams of Fortune, so play pay by mobile slots today! 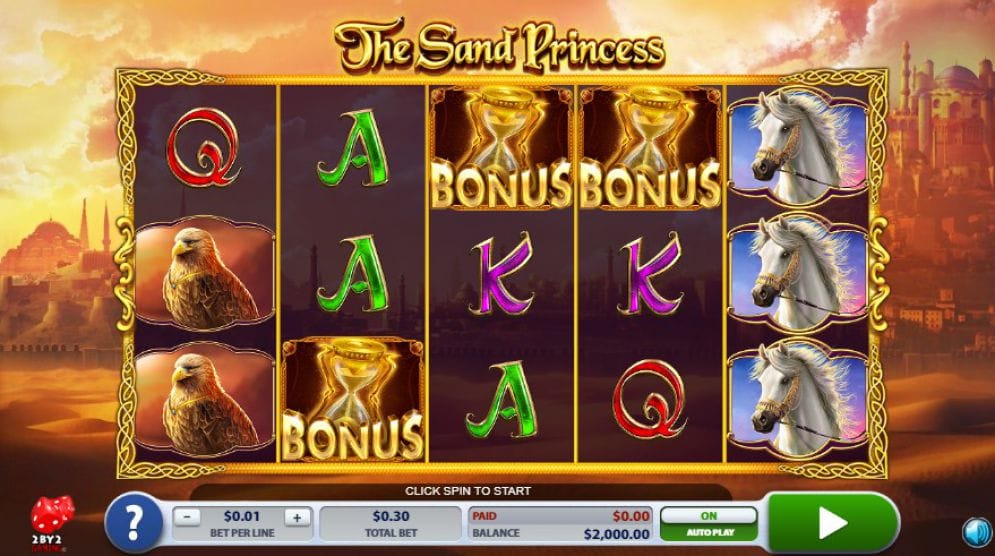 You’ll be whisked away to the sandy desert to play The Sand Princess slots online. There’s the ancient city in the background but you won’t reach that before you need to spin the reels. You’ve got five reels to spin and an impressive thirty pay lines to try and win on.

The game’s title is written in an Arabian-inspired font above the game board which looks just as elegant as the princess herself. The ordinary symbols aren’t much to look at – in fact, they are just colourful letters of the alphabet.

• WILD SYMBOL – The princess is the game’s Wild and she will take the place of all other non-bonus symbols. She will take up all three symbols when she lands on the third reel.

• SCATTER SYMBOL – The hourglass is the Scatter and can land on the second, third and fourth reels. You need to land at least three of them on the board to activate some free spins.

The Sand Princess uses the Wild symbol in a very unusual way, which some players will find adds an extra unique feature to the game. The design and user interface are also easy to use, so much so that newcomers to the world of online slots won’t feel like they’ve been thrown in at the deep end.

However, the range of bets is quite limited which will have an impact on the overall amount you could potentially win. If you enjoyed, try The Rat Pack slot next.