Set deep in an ancient pyramid, Queen of Riches awaits its next player. From gorgeous graphics and a compelling soundtrack through to special features such as Full Reel Wilds and tonnes of ways to win some gold, this game is a must-play and delivers some big results.

With more games on Mega Reel that you can learn more here.

Fuelled by experience, Big Time Gaming is an Australian based company whose team of industry experts have worked for some big names in the industry such as Rockstar Gaming and Openbet.

With over 10 years’ experience, they are dedicated to bringing you innovative, creative and original games, and free slot games which include their famous Megaways feature. They also work closely with major operator such as Sky Vegas.

Some of their titles include the very popular Extra Chilli and Bonanza.

Queen of Riches is a 6 reel mobile slots game with a whopping 117, 649 chances to win, due to Big Time Gaming’s trademark Megaways feature. Symbols can appear up to 7 times on a reel, lending to bigger and better bonuses. Bets can be placed between 20p and £40.00 a spin and it’s a relatively simple game for first-time players or those looking for something straightforward.

The graphics are well-presented and certainly represent the Egyptian theme well, from ancient Gods such as Anubis and Horus to intricate symbols and golden decoration. The background music is mystical and gentle, drawing you into the mysteries of the pyramid.

Symbols include those found in a deck of cards such as letters and numbers and some more Egyptian themed icons, such as the Eye of Horus and the Scarab Beetle. Due to the Megaways feature, winnings are not the highest, so these symbols pay out between 50p up to £30.00 for 6 of the pyramid image in a row.

Some of the free slots online most interesting features include:

* REEL CLONE FEATURE – this feature will trigger 2 or even 6 identical reels (hence its name) and you’ll want to keep an eye out for that full reel wild – 5 of these and you’ll get a pretty high payback. It can appear at anytime whilst you play.

* FULL REEL WILDS - no pyramid would be complete without its resident Pharaoh or Egyptian Queen in this case. As the wild, the Queen replaces all other symbols and will fill most of the reel. In addition, her appearance will also trigger some more wins in the forms of multipliers of up to 7x the bet placed. In fact, you can even win up to 49x your bet on this feature as some of these wilds can get cosy and multiply by each other. 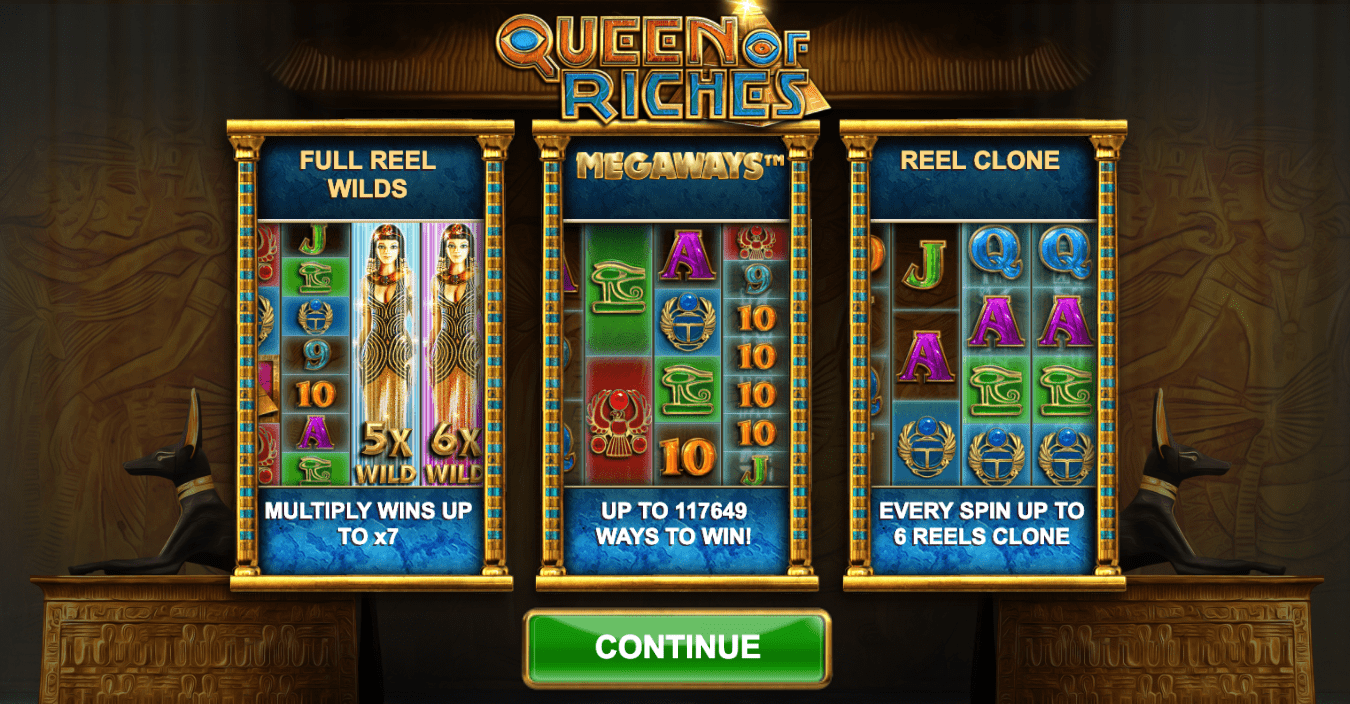 Whilst Queen of Riches isn’t the most original in its Ancient Egyptian theme, it certainly has a lot of nifty features that give it the edge amongst other similar themed games.

Its symbols may not offer the biggest value out there, but due to its unique Megaways feature, you certainly won’t walk away empty-handed and can still walk away with a pocketful of winnings. Try your hand in another queendom with Queen of Gold slot.