Set during the Vietnam War, Oliver Stone͛s 1986 anti-war classic has earned its place as one of the greatest war movies of all time. Winner of the Best Picture Oscar and a Best Director award for Stone, Platoon free spins game follows a group of soldiers as they fight and die while making their way through the harsh jungles of Vietnam. iSoftbet has licensed the film for its latest branded online slots game.

iSoftbet have a motto: ͚beauty in simplicity͛. All their games echo this sentiment, whether it be among their suite of slot games online or their wider range of casino games.

Providing entertainment for home or on the move via mobile, iSoftbet prides itself on casino games that are intuitive and just pure fun.

Platoon, the play online slots game, has a smartly-used dual score. One is ambient, featuring jungle birds chirping as footsteps gingerly pace through the leafy forest floor, guns being cocked ready for action and helicopters disappearing into the distance. Once you hit SPIN however, the music cuts in, a relentless tense score that tells you the game is on!

Visually, the Gameboard is a perfect mix of gunmetal grey background peppered with vines and other assorted foliage. The game icons are as worn and scratched as the soldiers͛ metal drinking flasks.

Platoon has a maximum of 30 lines in play though you can also choose to play 25, 20, 15, 10, 5 or a single line for less stakes. You can also adjust the coin value and line bet size to calculate your overall stake.

WILDS come in the form of tanks while SCATTERS are represented by a helicopter symbol. Any line win with at least 1 WILD awards respins and a 3x multiple. With each subsequent spin, any WILDS on the board one square to the left. Respins continue until all tank WILDS have left the board.

3-5 helicopter SCATTERS offer between 8 and 12 free spins. As an added bonus in the normal game, they also award a x5, x10 or x15 multiplier depending on your number of SCATTERS. Free spins can also be awarded during free spin rounds and just to make things a little sweeter, free spins pay both ways, awarding the highest win per each line. 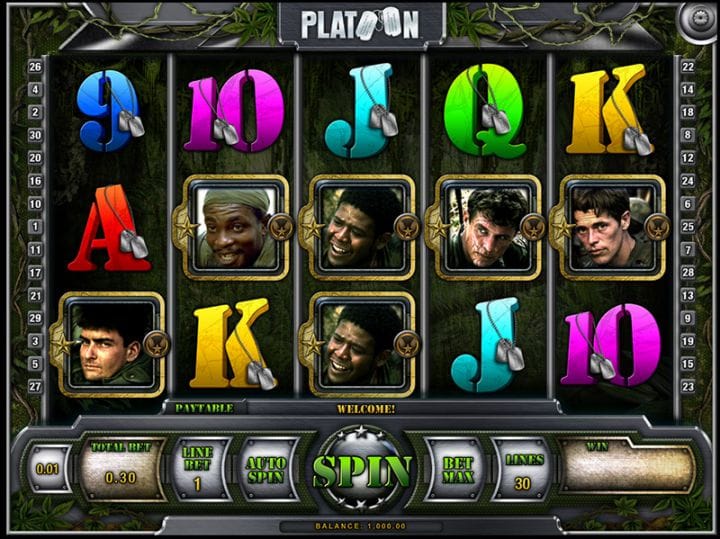 With a tense soundtrack that heightens emotions, Platoon definitely gets the pulse racing. With its moving tank WILDS and detailed score, Platoon is also a bit flashier than the average iSoftbet online slots game.

If you͛re a fan of the film or war films in general, you͛ll find much to love as you spin the reels in the official Platoon slots game. Try out Pixie Wings slot too if you are looking for big prizes!