Frozen Queen will transport you into an enchanted, frozen wonderland, where polar bears, Siberian tigers and arctic fox roam free, exploring the icy landscape and serving the beautiful Frozen Queen. Perched on the peak of a jagged, icy mountainside is the Queen’s majestic palace which looks down upon the wintery kingdom.

Soft, white snow delicately falls as you explore the magical world, which will remind you of the animated Disney movie that took the world by snow storm and have you singing at the top of your lungs.

On your journey, you will meet polar bears, arctic fox, snowy owl and Siberian tigers, which are all symbols on the reels reach to help you win some cool cash prizes. Head over to Mega Reel, the UK's most exciting free spin slots casino for more games like this.

Frozen Queen is a 4 reel pay by phone bill casino game, which are represented as four strong pillars of pure ice that glisten and glitter throughout the game. There is over 80 ways to win in this visually impressive slot game which means you will be speed-skating your way to cool as ice cash prizes.  The Frozen Queen is the expanding Wild symbol in this game, and one of the best features is the Free Spin feature, which will see the Frozen Queen herself appear to grant you free spins.

There are treasures to behold and win out on the ice, so you will want to get friendly with the Siberian tiger, as this is the highest paying symbol in the game: paying up to 16 x your stake when you land the tiger on all four of the ice pillars, but will also pay 8 x your stake if you land 3 of the symbols in a row. The Magic Crystal is the Wild symbol and will grant you 10 free spins and up your chances of landing winning combinations.

If you are in the stunning Queen’s good books, she will appear on the middle reel and work her magic to give you over 240 ways to win as the Sticky Wild symbol. The majestic queen will stay in place throughout the 10 free spins to give you a helping hand in your quest. 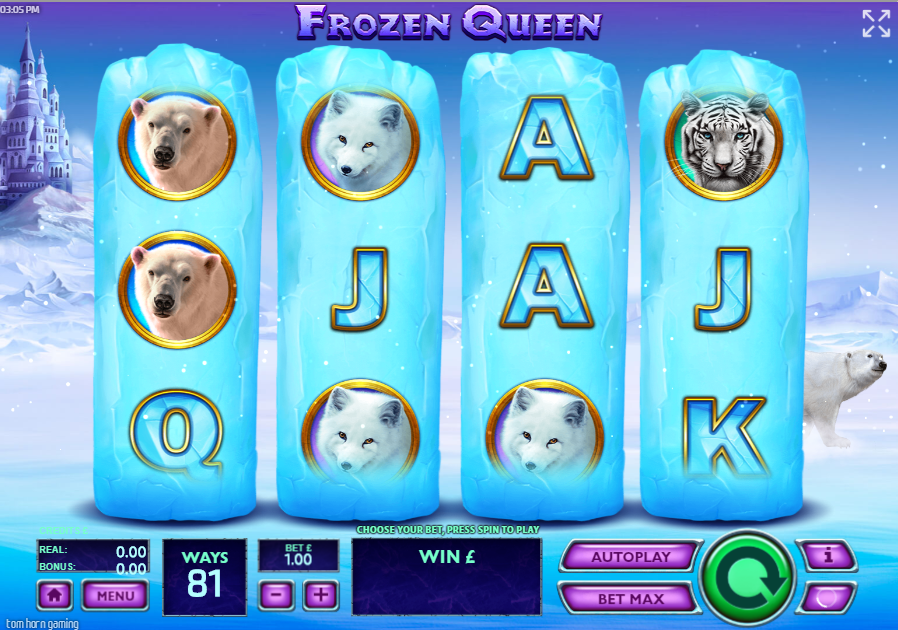 Frozen Queen is brought to you by Tom Horn Gaming, who are based in Slovakia, and are rapidly building a reputation as strong as an iceberg for delivering second-to-none slots online games with impressive themes and astounding graphics.

Tom Horn Gaming are taking the industry by storm by developing their unique games on HTML5, making them widely available with optimisation for play on desktops, smartphones and tablets.

If you were impressed with the impeccable graphics and generous game features, give some of Tom Horn Gaming’s other exciting casino games free spin a try:

One of the best things about Frozen Queen, apart from the fantastic and lucrative game features of course, is the outstanding graphics. You will barely be able to tell the difference between real animals and the computer-animated bears, owls, tigers and foxes in this slot game, as they are so realistic and impressive.

If you’d prefer to sit back and take in the stunning graphics and watch the snow creating a blanket over the icy world, there is a handy auto spin feature, meaning you can sit back and sip on a hot chocolate while you watch the prizes pile up.

Don’t delay, get your skates on and join the Frozen Queen and her furry friends on the ice. If you are a fan of this game, be sure to also play Frooty Licious slot.