Go into stealth mode and step into the shoes of the Ninja in this new and exciting slot game from Eyecon. 5 Ninjas is based around the martial art masters themselves and has plenty of exciting ways for players to win big.

The game layout is detailed, with well-designed graphics and plenty of realistic looking imagery that suits the theme of the game. Throughout the game there are various icons and the players must line up winning combinations of these icons to try and generate wins.

There are also a number of bonus symbols that can increase the player’s winning, with potentially large payouts available. Follow this link to get free daily spins.

Ninja is the ultimate online slots for lovers of martial arts who want to win some stealthy prizes. The game features 6 reels and 20 paylines. The game contains 7 main icons that players will need to line up to be eligible for wins. The key is to get multiple lines of identical symbols in order to generate returns.

The icons include 4 ninja weapons, all colour coded to include yellow, red, green and blue, as well as ninja stars. The 3 other icons are a yellow, blue and red ninja. The wild symbol is represented by a black ninja, which can be used to replace symbols to generate winning lines.

There is also a Secret Ninja Multi round, which savvy ninjas can access as by lighting up 5 element symbols which also appear within the game. These need to be activated simultaneously for the player to be able to access the secret doors within this round. Head to Mega Reel and check out all games for you. 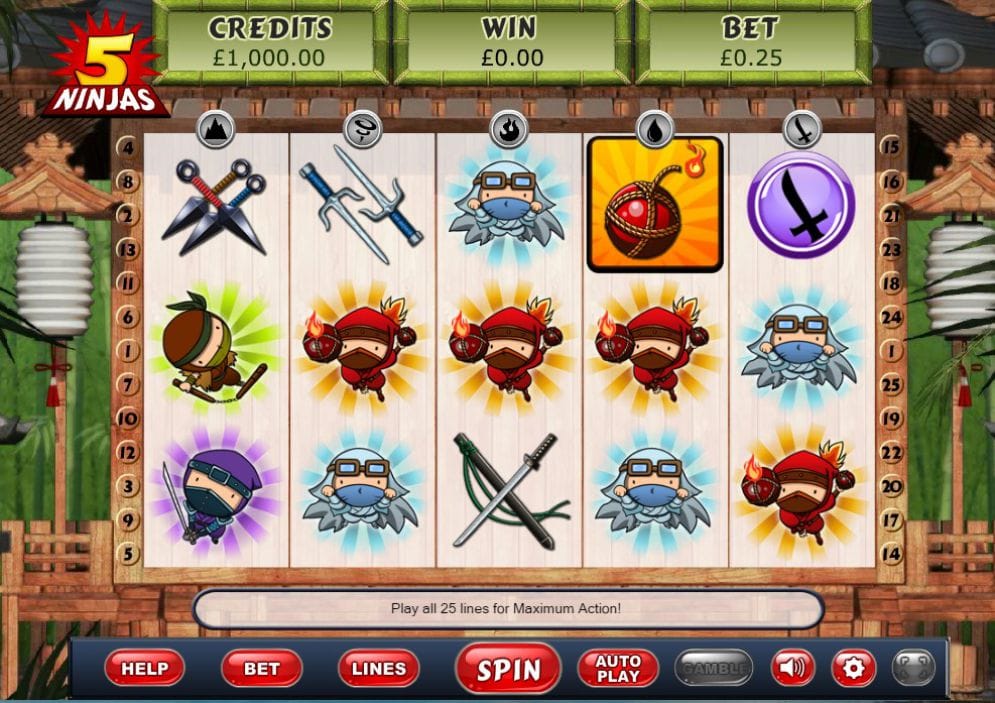 Australian games developer Eyecon have been developing games since 1997 and are commonly considered a dominant force in the games development market. Eyecon have succeeded in creating a portfolio of games which offers something different for all kinds of gaming fans.

Games by Eyecon are consistently well received and their games regularly receive millions of spins annually. Eyecon continue to offer high levels of creativity and innovation to the online games industry. Some more popular pay by phone casino titles produced by Eyecon include; 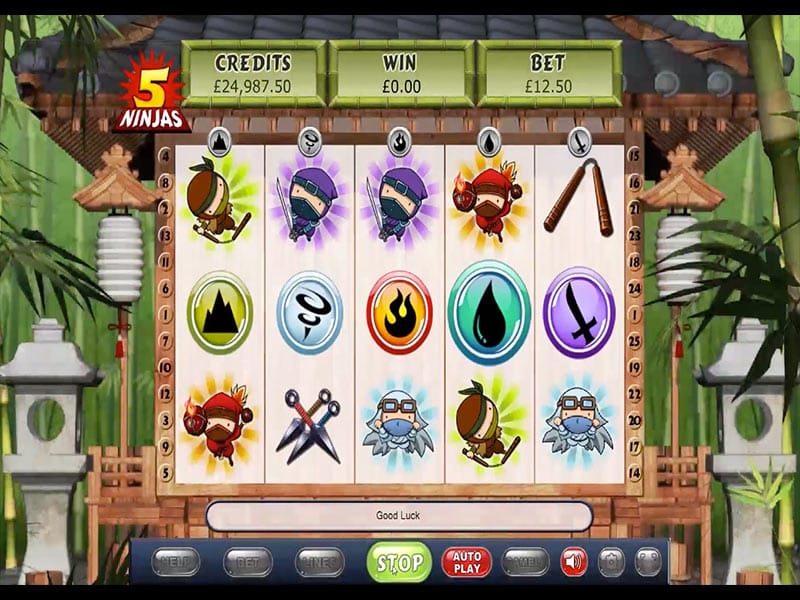 Ninjas features some great visuals and will appeal to a large base of online slots fans. The original theme of the game, simplistic gameplay and bonus features make 5 Ninjas an enjoyable slot that players will want to return to after their first play.

The Take Risk button is a nice touch, as it allows players to take a further gamble to try and double their earning for an even higher return. There are plenty of chances to win with the wild, which can create winning combinations and give the player more chances to win in the form of free spins. Mega Reel also recommends that you try 3 Kingdoms - Battle Of Red Cliffs slot.