We can’t think of a casino slot game that is as quirky and unique as Eggomatic freeslots on Mega Reel. Have you ever heard of one as left-field as a game themed around robotic chickens? Didn’t think so! The game takes place in an egg factory that is down on its luck.

Egg production is at its lowest rate in years, and the head rooster needs to act fast to save the factory. So, he invents the EggOMatic machine and robot chickens to make even more eggs. Will his plan be successful? You need to spin to find out!

NetEnt are known for adding something a little different to their games. In the case of Eggomatic, it’s a completely unexpected theme. But the quirkiness of the theme isn’t the only thing going for this slot game, as the graphics and animation also help it stand out from the crowd.

Thanks to its 3D design and unforgettable background story, Eggomatic is just as good as NetEnt’s best games, such as Emojiplanet and Butterfly Staxx. Play slot games or click to view free slot games here by NetEnt! 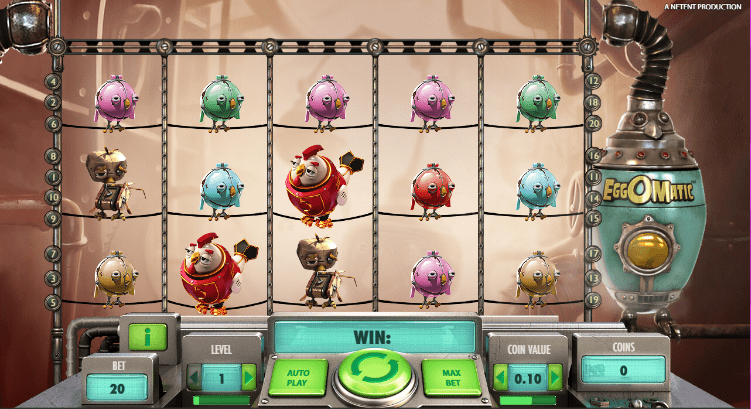 You’ll be taken straight to the head rooster’s secret lair to play the pay by mobile slots game. The machine’s controls will be right in front of you, and these feature the buttons to spin, auto play and max bet.

Right in front of you is the Eggomatic machine, and you’ll see lots of different robotic chickens perched on wires. These are the reels and symbols that you’ll need to spin. All of the symbols are chickens, and you’ll be playing on five reels onlineslots. There are twenty fixed pay lines on the board.

The more matching chickens you can line up along the pay lines, then the more money you stand to win. Some of the chickens are extra special, though, as they can help you unlock some bonus features.

• WILD SYMBOL – Keep your eyes on the large robot rooster as he is this game’s Wild symbol. He’s standing behind a shield that says ͞Wild͟ on it. He can replace any other symbol on the board, helping you increase the size of your jackpot. This rooster can also catch eggs that drop from the top shelf and award you Spreading Wilds, Coin Wins and Free Spins.

• BONUS GAME – You don’t need to activate the Bonus Game as you do with some slots; the one in Eggomatic is constantly on the go. You’ll see eggs move along the conveyer belt above all the reels. You just need to try and land one of the Wild roosters underneath the egg. The egg will then drop down through the reels into the rooster’s arms, and you’ll win whatever prize is inside it! 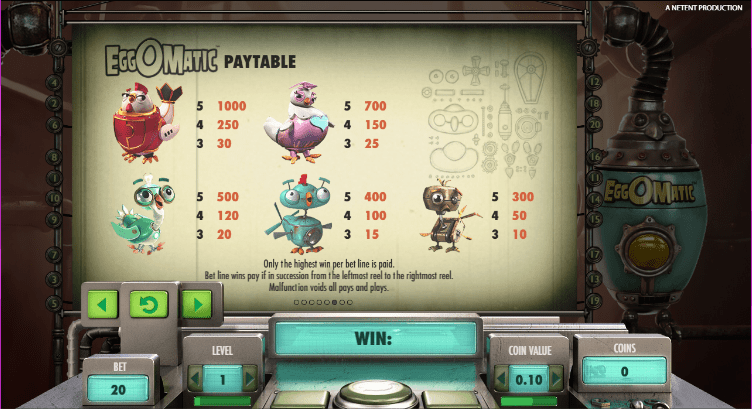 The graphics and design of this game will definitely catch your eye, and the fun bonus rounds will keep new and experienced gamers spinning for a win! If you enjoyed Eggomatic why not try Eastern Dragon slot