The Exotic sands of the Arabian Gulf are home to the action of Eastern Delights. A world of beautiful and mysterious princesses, splendid Sheiks and opulent and ornate palaces awaits gamers in this 5 reel, 21 pay line slot that challenges and rewards in equal measure.

Developers Playson have once again excelled themselves, creating an environment that immediately transports players to another time and place. The sound effects of the near orient give a typical feel to play, while the symbols and background graphics show a world rich in colour and treasures, just like the court of a wealthy sheik on the Silk Road.

Eastern Delights promises great riches to those who will enter this exotic and mysterious kingdom on Mega Reel, the place to go to play free spin slots.

Playson provides unique gaming solutions to the online casino industry, and their recent big hit, Legends of Cleopatra, has put the Malta-based firm on the map. With more than 250 staff around the world, Playson are committed to creating games that push boundaries in the online casino space.

Stunning graphics, backdrops and interesting twists on the classic slot machine format has earned the company many fans as its reputation for excellence in the field of online slots grows.

Other titles from Playson include: Viking Gods: Thor and Loki, Fireworks Master, Dracula’s Family and Art of the Heist. Check out free casino games today for more games by Playson!

The court of a wealthy sheik provides the backdrop to Eastern Delights, an online mobile slots game where the action takes place over 5 reels and 21 pay lines. Gamers are surrounded by opulence and luxury of the grandest palace, and hopefully some of that wealth and magic will rub off onto them!

The familiar symbols of 10, J, K, Q, A are all there, rendered in a middle eastern style, but the special symbols to look out for including the beautiful princess, peacocks and a sumptuous feast are what yield potentially big prizes, so play online slots now!

Other key features include:

Wilds – The wild symbol in Eastern Delights is a bejewelled question mark, and substitutes for any other symbol, with the exception of the lamp and the scatter symbol

Scatter – The beautiful princess is the scatter symbol. Land 3 or more of her on the reels and a player will trigger a Free Spins round. 4 is the default number, but more can be triggered during the feature to bring the total number up to 50

Drop – The Lamp of Djinn acts as the drop, destroying all the symbols in every row it appears on an raising the possibility of big wins and compounded pay outs.

Wagers in Eastern Delights can start at 1p per pay line, and bets adjusted from 1p up to £5. 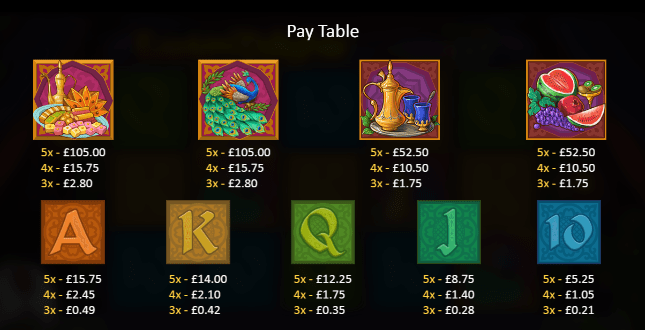 Eastern Delights is a treat for the senses, and with so many ways to win, hopefully one for the wallet too! The scenario of the Arabian Palace conjures up images of the exotic and faraway, while the easy game play and bonus features give a real scope of variety.