Clover Tales best online slots uk by Playson is a 5 reel, 27 payline slot which you can play at Mega Reel. It has an Irish theme and is playable on desktop, smartphone and tablet devices. Punters will journey to the rainbow’s end to collect their pot of gold.

The slot has a Rainbow Line feature which activates free spins and re-spins. Players can also win from expanding wilds in the main game and during the Free Spin feature. Start your bets from 27p to £90 per spin. favourite slot in 2020

Playson was formed in 2012 and is considered afresh face in the industry. The company hasn’t operated for a decade yet, but they’re already forming a reputation as one of the gambling businesses to watch.

Their achievements include; a workforce of over 250 employees, 3 certified gaming licenses and business relationships with some of the industry’s biggest names like Quickfire, Bet Construct, 1X2 Gaming and more.

You can also check out free casino slot games for more fun! 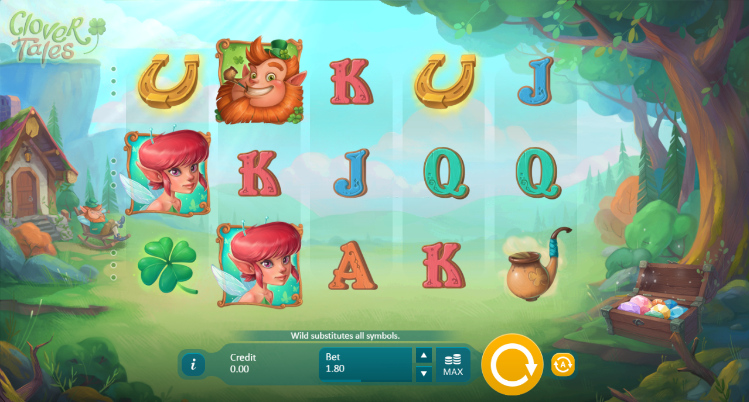 Punters will find themselves in of the most charming gardens and find an Irishman fast asleep in a rocking chair. In his heavy sleep, he must have forgotten he left some magical stones lying on his chest. The reels are full of symbols like pixies, 4 leaf clovers and leprechauns. The slots for mobile game’s background features some peaceful music with a bird humming to create a dreamy atmosphere.

• The Re-spin with Frozen Wild icons feature – the icons that activated the feature turn into frozen wilds and remain locked in place for the next free re-spin.

• Re-spin with Shifting Wild icons feature – the winning icons change into Shifting Wilds which change position on the reels at random for the free re-spin won. If you form a win using the fairy or leprechaun symbols on the Rainbow Line, you get to access either of these 2 Free Spins features:

• Free Spins with Random Expand Wild icons feature – this gives you 5 free spins and between 1 to 5 expanded wilds that will land on the reels randomly during every free spin.

• Free Spins with Wandering Expand Wild feature – you also win 5 free spins and an expanded wild which lands on the 5th reel during the 1st free spin. The Expand Wild moves 1 step to the left landing on the closest reel during every free spin.

Clover Tales follows the exhausted Irish theme, but has unique gameplay. You can win big during the main game thanks to the expanded wilds. Players will especially like the Free Spins feature that has the Random Expand Wild icons feature and gives players a chance to benefit from expanded wilds.

The slot’s variance stands at medium to high. If you liked this try Claws vs Paws slot.