The days of the Roman empire may be well and truly over but it is safe to say that the impact and influence of it can still be felt across the world, as it continues to inspire restaurants, movies, TV series’, books and everything else in between - heck, even sometimes interiors.

It would be fair to say that this influence has also even made its way to the online casino world of gaming, and Ave Caesar by Leander Games is one of these mobile slots that have been based on the Roman period, with plenty of bonus features to keep you entertained throughout the game.

This online free spin slot game is set across three rows with 20 fixed pay lines, and the scene is set with the help of a paved square that has been filled to the brim with temples, grand authoritative buildings and viaducts all in the background to the opulent golden reels.

Leander Games are the makers of 278 online games for 132 online free slot games casinos with 63 partners and 11 jurisdictions under their belt. Not bad. According to the Leander Games website, they are an industry-leading games studio with a presence in the biggest operators out there with a huge and ever-growing portfolio which boasts localised games for 31 countries and certified for most major markets.

As well as Ave Caesar, Leander Games are the makers of other popular and well-known gaming titles which include: 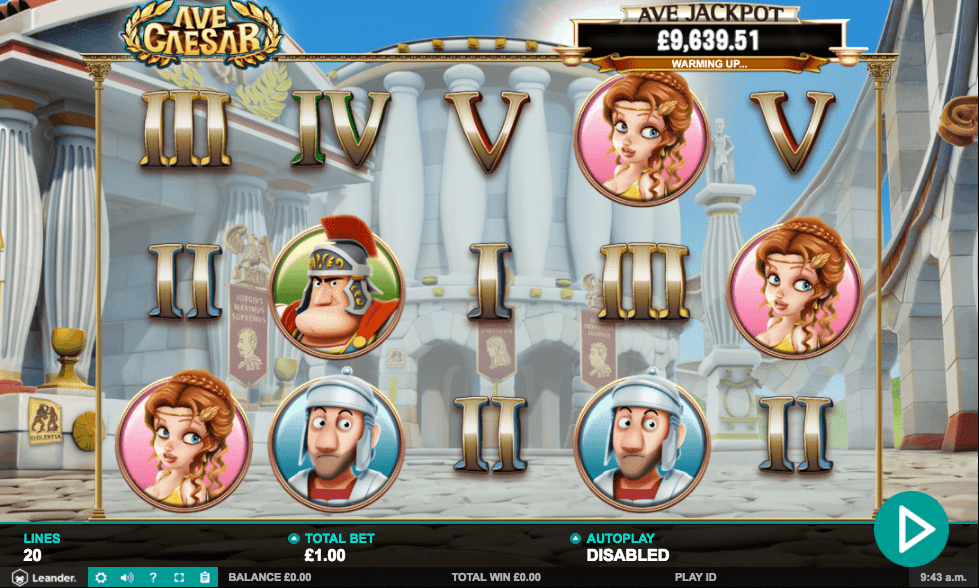 With this free slots online, you will, of course, want to be on the lookout for the more high-value symbols. These come in the form of the logo of the game, a legionnaire, a centurion and a brunette woman. The more low-value symbols to be expected with Ave Caesar are the apt I, II III, IV and V.

The wild with this online slot game is Caesar himself, and this symbol subs out for all of the other symbols to help make up winning combos with the exception of the SPQR bonus icon - (short for Senatus Populus Que Romanus.) In terms of the main bonuses that you can expect to find with this online slot game, these are triggered when you land three bonus symbols on the reels one, three and five - however, the fifth is a little different. This will decide which feature is awarded, of which there are four.

The bonus features include, first off, a bit of a strange one that is eerily titled Caesar’s Conquest, whereby he Caesar picks from three tents to find a girl to keep him company and give some cash for a while, and this will continue from tent to tent until something else answers him. Other features include ten free spins with the Glory of Rome, another 10 free spins with the Druid Free Spins plus multiplier wilds and many others.