The Ancient Egyptians were known for their earthly riches and treasures so, as you might expect, there is a lot waiting to be won in Pragmatic Play’s Ancient Egypt casino spins at MegaReel.

There are piles of gold and valuable trinkets in the ancient treasure room; all you need to do is to try and spin the reels, so they land some matching symbols on the pay lines.

Let’s hope all the Ancient Egyptian gods are looking favourably on you today. If ancient Egypt isn't your thing, you can play other free casino games.

Pragmatic Play are currently known as one of the fastest developing games companies out there at the minute. They have a large portfolio of mobile casino games that are loved by all different levels of gamers thanks to their creative themes and imaginative designs.

Now they’ve added the Ancient Egypt slot to their back catalogue, which is of Pragmatic Play’s usual very high standards. Love this game? Why not try out Lucky New Year or Queen of Gold next?! 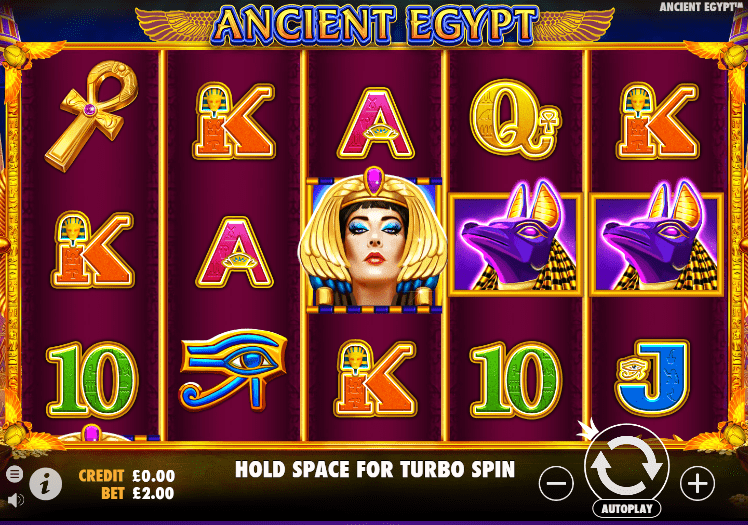 This online slots game is very much inspired by Ancient Egypt. It looks like an extremely royal board as lots of golds and deep purples are used. Right above the game board, you’ll notice that the game’s dramatic title logo is flanked by golden wings. There are also some discreet gems and precious stones used to decorate the board as well, giving the whole game a slightly sophisticated look.

There are five reels to play with and a total of ten possible pay lines. You’ll see that all of the symbols on the board have been inspired by Ancient Egyptian culture. Even the basic letters have jewels and intricate details on them. When it comes to the picture symbols, you will see female goddesses, an Ankh symbol and the eye of Ra. It’s these picture symbols that you need to focus on matching up on the pay lines as they will big the bigger jackpots. There are also some other special symbols that can increase your winnings.

• WILD AND SCATTER SYMBOL – The golden scarab beetle on the board is both the Wild and the Scatter in this slot game. You just need to spin at least three of them onto the board to benefit from some multipliers. Not only that, though, but you will also activate the bonus game. You get to choose one of three boxes that will appear before you. Each box has a prize, but some are worth winning more than others. For instance, there are some free spins and large multipliers up for grabs! 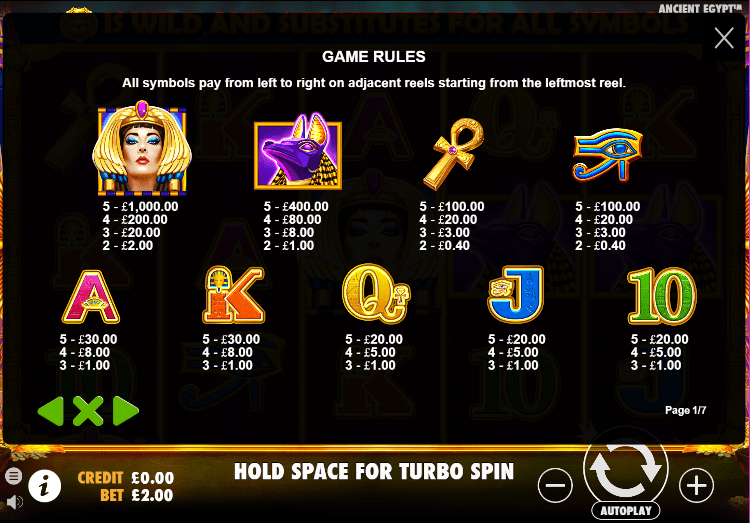 On the face of it, you might think that Ancient Egypt is as simple as casino slot games can be. However, once you start spinning the slots, you will see that it is anything but. The bonus symbols and features come around fairly regularly which will keep you hooked to the game.

They’ll also keep your odds of winning fairly high! So, if you’ve been looking for a sophisticated Ancient Egypt-themed slot that could be profitable, this one is for you! If you enjoyed this game, you must also try out the Amazing Aztecs Slot.