A civilisation that was known for being rough, mighty and strong – imagine them if they went Berzerk! The Vikings Go Berzerk slot game puts you at the helm of a Viking ship, steering yourself and the crew to a new land, a new place to discover, explore and loot.

Think you͛'ve got what it takes to battle alongside the berzerk Vikings? Give it a go! And find similar viking themed free slots.

Yggdrasil class themselves as the underdog among the giants, and it͛s clear to see why. They received their first license in 2013, won slot provider of the year in 2017, and have an impressive range of high-quality slot games (could be why they won the accolade).

For starters, the soundtrack already has you gearing up for a battle – music that͛'s very classic in films, in that ͚calm before the storm͛ moment. The mobile casino reels are set aboard the Viking ship, and the animations are stunning, which you can see even before you͛'ve spun – but they only get better once you start playing.

There are various Viking symbols across the reels, from the Viking͛s themselves to treasure chests and coins. The Viking in red is the highest-value, paying 250 coins if you match 5 of him.

You͛'ve got two ͚modes͛ which you can play in – rage and berzerk. Each time you win with a Viking symbol, that Viking collects rage. Then when the Viking͛s rage meter is full – they͛'ll give you 7 free spins with that Viking in berzerk mode. And Viking͛s that go berzerk, always win against the siren in those free spins. Why is that important? Because if the siren appears, the Viking needs to battle her in order to become a sticky wild.

Wild symbol – substitutes every other symbol on the reels and can award up to 25 free spins.

Free spins – before you get your free spins (up to 25) you͛'ll also be awarded an extra bonus. This can range from all Viking͛s going berzerk, to sticky wild͛s, sticky reels, extra free spins or 5 extra treasure chests and golden chests are added to the reels.

Treasure chests – these will only land on reel 4, in the base game and in the free spins game. However, you will be awarded different prizes depending on which game you͛'re in. Landing one in the free spin mode gives you higher-value prizes. This is exactly the same for the golden treasure chest, except that one only lands on reel 5.

Play now this slot and so many others like it! 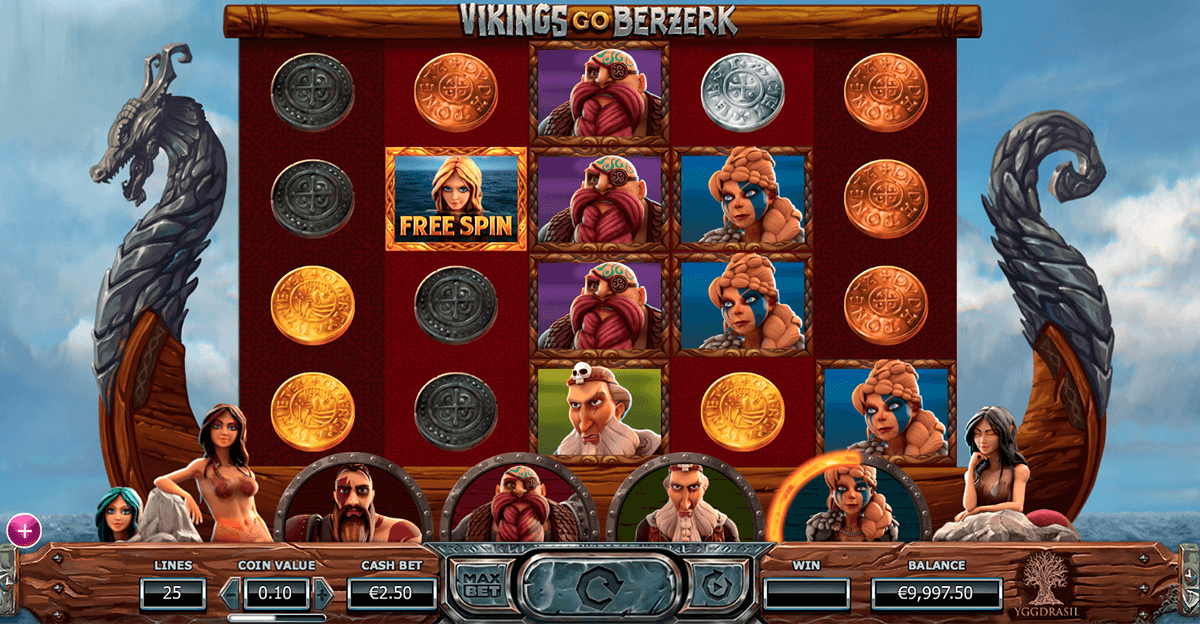 A really great looking slot game, Viking͛s Go Berzerk pulls you straight into another universe, without even giving you time to catch your breath. The game play is smooth, the bonuses are fun, frequent and can be lucrative. It͛s the perfect follow on in Yggdrasil͛s Viking Collection. We only hope they bring out more! Try out Vikings slot if you liked Go Berzerk