Enter the Egyptian magic land of ‘Tut’s Twister’ where King Tut has been woken from the dead and risen from his tomb causing mayhem across the game of 5-reel, 4-row with 25 payline.  This angry regal mummy is on a mission and you can live the adventure through him and allow him to help you reach the unimaginable riches waiting for you.

So be brave and unleash ‘Tut’s Twister’ online slot game and fight your way through hidden curses to feel the awesome twister power! Check out Mega Reel for more.

‘Tut’s Twister’ is a transfixing online slots game of Pharaohs, curses, sandstorms and hieroglyphs.  Transport yourself to Tut's ancient realm and enjoy the magnificent symbols of ancient Egypt where the 4 main symbols are seen as ancient scrolls, ornate rings, beautiful birds and pots of gold.  The 4 low value symbols are seen as hearts, spades and diamonds. The Wild symbol is represented by a demonic pharaoh.

If two Wilds are hit, King Tut will whisk himself into a tornado of sand and this will create tall pillars of Wilds. This Wild vortex will throw itself across the reels and offer respins as it causes havoc across the screen. Use single Wilds to gather hieroglyphics which will unlock hidden curses and unleash awesome powers!

The twister feature offers respins, but only as long as one Wild is walking, then a final respin is awarded to give the player one more try to land one more Wild.

‘Tut’s Twister’ is from the stable of the Yggdrasil team, they provide superior online games for complete gaming enjoyment. Founded in 2013, Yggdrasil is now one of the industry’s most acclaimed slots online suppliers. Yggdrasil have won a number of awards including: Software Rising star, Innovator Of The Year, Slot Provider Of The Year and Gaming Software Supplier Of The Year.

Through exceptional design and graphics and software gaming innovations, the team keep ahead of the rest with their constant flow of new and exciting concepts.  Other games from them include:

If you enjoy ‘Tut’s Twister’ we think you would also love ‘Trolls Bridge’, ‘Wolf Hunters’, ‘Dark Vortex’ and ‘Legend Of The Golden Monkey’ 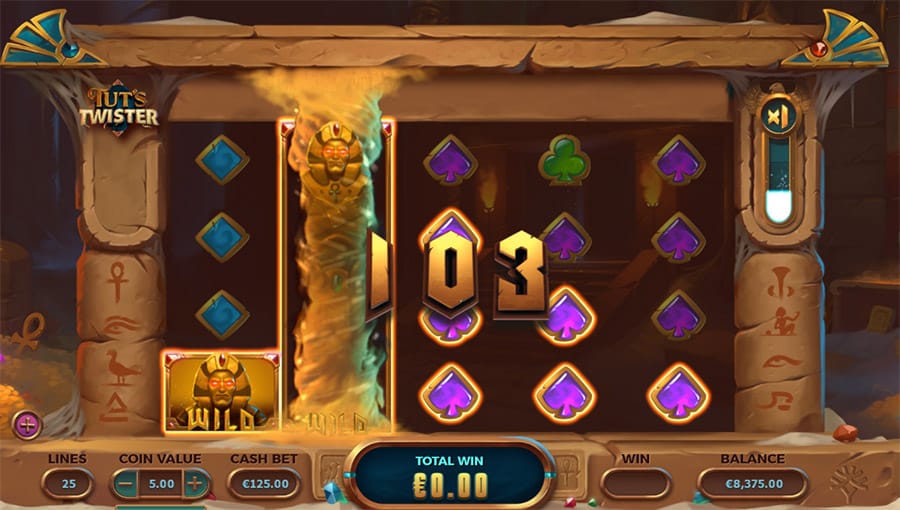 From ancient Egypt King tut has risen and through his power and sand shape shifting will allow you to conquer the curses and claim your fortune.  This stunningly atmospheric game allows to really get involved and enjoy the symbols with which to further your chances of winning. Magic and mystery abound and we give this game a mummified thumbs up!!!

Check out Trolls Bridge for more.