What online casino gamer hasn’t wished for the world-famous luck of the Irish? With Stacks O’ Gold free spins casino, developers Isoftbet have produced a game that doles this out in spades, along with a good dollop of charm and fun from the Emerald Isle. Stacks O’ Gold is played over 5 reels with a very generous 34 pay lines, all set against a colourful backdrop of a picturesque Irish country scene.

With fun graphics showing everything from pints of stout to golden harps, and a soundtrack that transports the player to the beauty of Ireland, there is much to love about Stacks O’ Gold onlineslots on the quest to find that crock o’gold at the end of the rainbow.

Isoftbet have forged a reputation for producing some of the most exciting titles in the online casino industry. Whether these are original concepts or franchises of popular films or television shows, the company is able to make products that delight players and push the boundaries of expectation in the online slot gaming industry.

With offices in London and Luxembourg, Isoftbet continues to expand and grow. Titles from the company include Eye of the Amulet, Super Multitimes Progressive HD, Skulls of Legend, and Tree of Fortune. To play their free slot games click the link above! 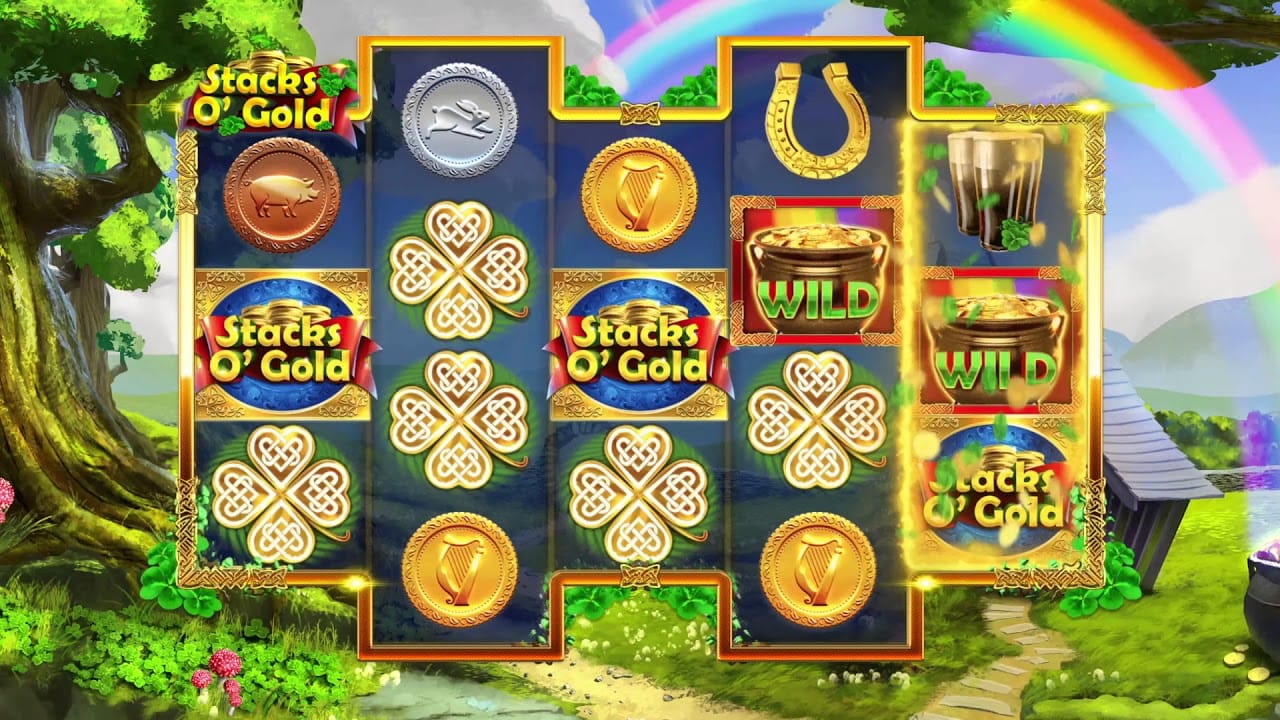 Stacks O’ Gold pay by mobile slots is played on 5 reels, 3 of which have the ability to turn into sticky wilds. There are an astonishing 34 pay lines, and the aim of the game is to match up symbols in order to win prizes, with a minimum stake of just 0.20.

Charming coins are the lower values, with everything from pigs to rabbits and harps represented on the coins that if they match up will start paying out. Other symbols to look out for include lucky four-leaf clovers, horse shoes, green hats, pints of foaming, dark stout and the Stack’s O’Gold logo, which lead to money spinning bonus rounds.

Wilds – The crock of gold is the wild symbol, and replaces all others on the reels with the exception of the bonus feature symbol.

Free Spins – The Stacks O’ Gold logo is the free spins feature, and landing 3 of them on the reels will trigger this part of the game. Players are granted 15 free spins, and they should be praying for wilds during the feature. Each time one lands, it’s collected in a meter.

Once 6 are collected, the player is given 2 extra free spins and reel one becomes sticky, remaining so for the rest of the feature. Collect more wilds and even more reels become sticky, this is know as the super stacked wilds feature. 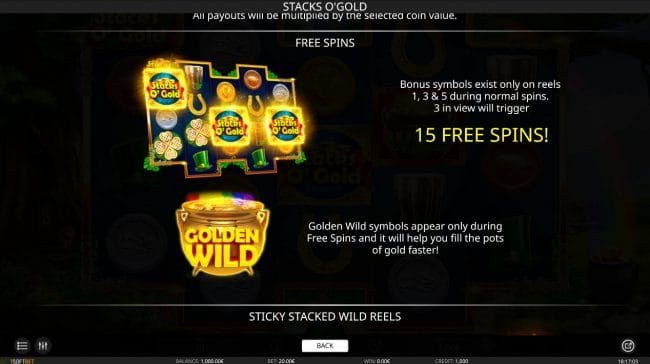 There is so much fun to be had with Stacks O’ Gold, where players can stake anything from 0.20 to 20.0, making this suitable for those who like to gamble both big and small.

The fun setting and the soundtrack make this familiar to fans of Irish themed slots, and help create an atmosphere that brings the gamer the luck of the Irish! Check Spooky Family slot if you liked this game.