We’re not making small talk, we’re just genuinely introducing this slot game by Yggdrasil – about weather. The Brits do like to talk about the weather, so free slot spins thought you may want to play it too?

Yggdrasil have just won slot provider of the year in 2017 – and if you play some of their games you’ll be able to see why. They’re a relatively new kid on the block but look at their portfolio and it’s easy to see the passion, the creativity and the smarts that go behind them for casino slot games.

From the unbelievable, top quality animations to the smooth game play. We bet even though this Seasons onlineslots game is about the weather, it’ll be damn good. 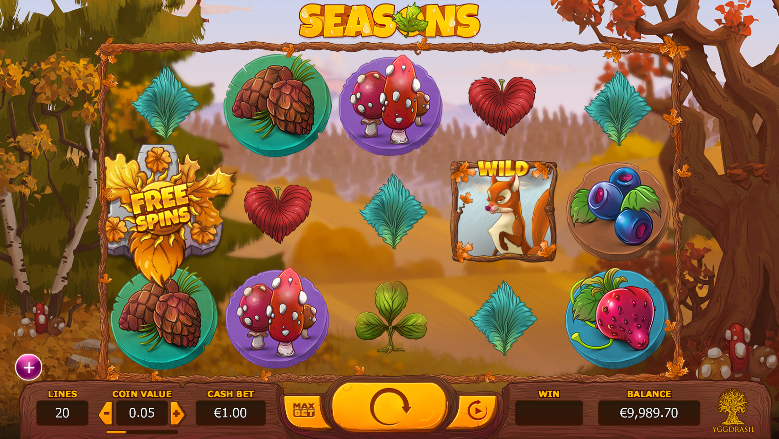 The reels are a normal 5x3 set up with 20 paylines, but because there’s four seasons, it’s only right that there’s four mobile casino games, each with their own bonuses, with free spins in all four! The reels are set on a forest background, which changes through the seasons (as do the reels).

It’s bright and vibrant in the summer, dark skies and brown leaves in the autumn, the icy snow in winter and full of flowers in the spring. The symbols on the reels even change throughout the seasons – so the higher value ones can go from summer berries to nuts to toadstools.

Wild symbols – these also differ between the seasons. The hare in winter, the owl in spring, the deer in summer, and the fox in autumn.

•The hare wild: he’ll duplicate onto another position on the reels depending on where will collect the most wins.

•The owl wild: the owl gives you a free spin and keeps moving around – the round will end when the owl disappears off the reels.

•The deer wild: the deer will expand into a cross when it lands, so it’ll land somewhere and then expand one above, one to the left, one to the right and one below. 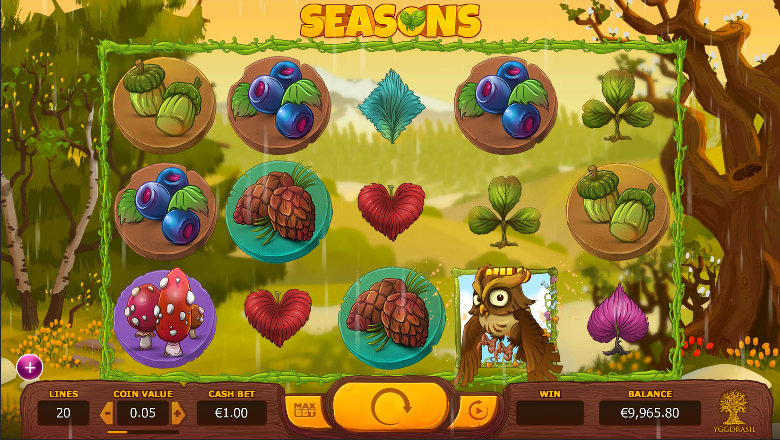 Cute, fun and easy-to-play, Seasons is a slot game that could have been very basic if taken on byanother company, but Yggdrasil have managed to do something complex with it in terms of making four different games for the four different seasons, and the different bonus features.

All in all, an enjoyable game. Next up is Scrooge slot.