Powered by Microgaming, Reel Talent takes you to the stage of a talent show where animated animals display their specialist skills for you to see. Whether it’s the rabbit magician or wolf guitarist performing, you’ll be in awe of the vivid animations and exciting gameplay on Mega reel.

This 5-reel slot has 20 pay-lines that you can activate for each spin. Although there isn’t a concrete Free Spins Feature, there are plenty of bonuses to keep the action coming thick and fast including Symbol Storage, Re-spins, Wilds and Superspin. Put yourself in the shoes of a talent show judge and see what you make of this entertaining slot. If this doesn't sound good to you, take a look at our other free slot spins.

Offering different variations of online slots including progressive jackpots like Mega Moolah and engaging video slots like Jurassic World, Microgaming can do it all. Once you’ve experienced Reel Talent, make sure you try out the following pay by phone bill casino titles: 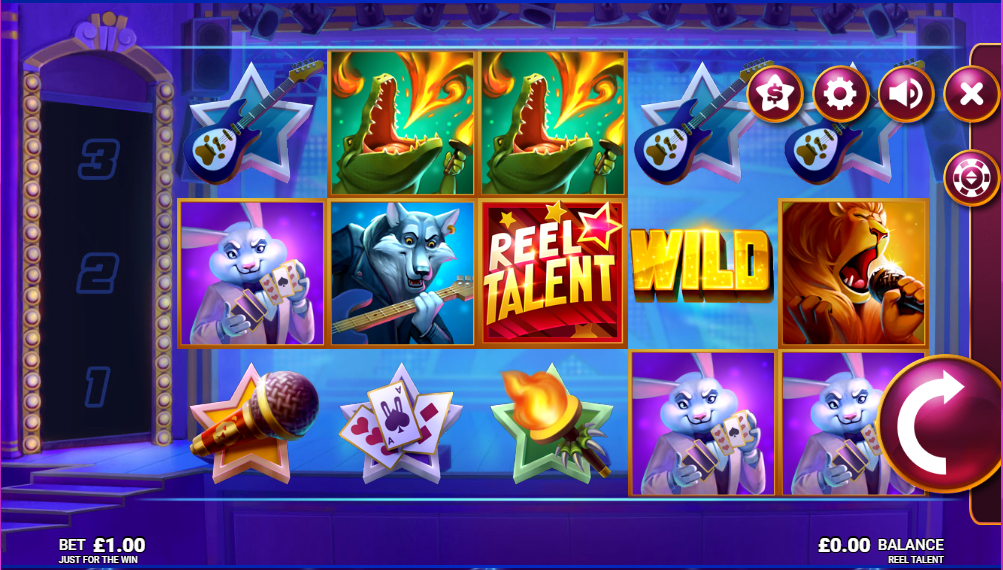 Combining a modern talent show with online slots action might not be the first thing that springs to mind when you enter your favourite free slots online casino, but Microgaming have made it a huge success. As you enter the game, you’ll be situated in the audience looking at a colourful stage where cartoon animals will display their talents.

As for the gameplay, there are a variety of low and medium value symbols representing the theme. The lowest paying symbols are playing cards, a guitar, flame torch and microphone. For medium value wins you’ll have to discover the rabbit magician, wolf guitarist, crocodile firebreather, lion singer and Reel Talent logo. Not only that but within the base game are WILDS, Symbol Storage, Re-Spins and Superspins that will increase your winnings. Find out more below:

If there are still empty spaces within Symbol Storage after a winning spin, you’ll be awarded a Re-spin. When no empty positions remain, the Re-spin will end.

When you’ve collected 3 symbols, a Superspin is awarded.

Based on the symbols collected during Re-spins, different visual stages are presented during Superspin mode, such as:

Stage 1 (Showtime) – Three different symbol types will be on display

Stage 3 (Solo Performance) – Three symbols of the same type will be on display.

Reel Talent is undoubtedly a fun slot with fantastic animations and a unique theme. Despite it not having a Free Spins Feature, you can hit some huge winning combinations within the base game which will result in more Superspins.

The only downside of this slot is that it’s extremely volatile, so you’ll need a big bankroll if you want to stick around and play this slot for long periods.

Microgaming know how to veer away from the norm and keep players excited, which is why Reel Talent is a great slot to play. For a similar experience, try Reel Rush slot.