Foxes and luxury yachts don͛t usually mix, but with Foxin Wilds Again it seems to work perfectly. This NextGen slot, available with daily free spins, is a remake of the original ͚Foxin Wins͛ slot and has added some new features to give the game an edge.

This 5-reel slot comes with some of the best bonuses and features, such as: Foxin Wilds, Super Bet Bonus and Foxin͛s Pup Wilds. Even if you don͛t have the best of luck with the bonus features and wild symbols, the base game is enough to keep you cashing in on regular wins. Take in the beautiful surroundings of the ocean as you͛re on the hunt for Foxin͛s cash.

NextGen have been in operation since 1999 and have been producing some of the most dynamic and entertaining casino games. If you͛re unaware of who NextGen are, its likely because of the way they operate in the gaming industry.

An abundance of their slot games that they develop are licensed to other software platforms in the community. A lot of their games are hidden gems as you͛re usually playing NextGen slots at an online casino powered by Microgaming or Playtech. Here are some of the freeslotgames that have been developed by NextGen:

Click on this link for more exciting pay by mobile slots! 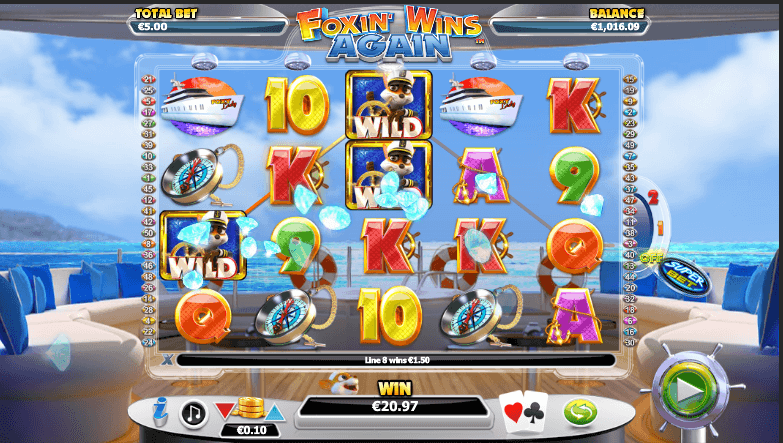 Foxin Wins Again is a 5-reel slots online with 50 pay lines on offer to the players. The sunlit ocean background gives you the opportunity to get your feet wet and dip into the real money action. If that͛s not enough to keep you interested, the cute foxes jumping around on your screen and helping you win should do the trick.

For the base game, the reels are full of your standard symbols, like: 9, T, J, Q, K and A. In addition, the compass, cocktail and foxy lady liner symbols will contribute towards base game wins. For bigger wins look out for the Foxin WILDS, bell SCATTERS and Foxin pup SYMBOLS. We͛ve gone into more detail about these great features:

• FOXIN WILDS – If you hit a winning spin with two to five Foxin WILDS then you could receive a pay-out of anything up to 2,000x your stake.

• FOXIN PUP SYMBOLS – These SYMBOLS will appear out of nowhere and can turn a number of symbols into wilds. If you manage to find all 5 pups in one spin, you could receive a huge pay-out.

Good animations, a lucrative bonus feature and cute foxes jumping around on your screen, what͛s not to like? Even if the storyline and adventurous theme don͛t suit you, the slot itself has the potential to pay-out huge cash prizes. Try out this great NextGen title today - and don't forget about the original Foxin' Wins Slot.