Join in some Chinese New Year festivities with Dancing Dragons from Casino Technologies. Step into an ornate world of gold and culture and enjoy some of the great features this game has to offer, such as wilds and scatters and a double up mode to increase your winnings at the free spins casino, Mega Reel.

Casino Technologies was established in 1999 in Bulgaria, and since then have grown to have a presence in 15 countries. Their aim is simple; to create revolutionary games that change perceptions. They are bold, experimental and do everything with passion. Some of their games include: ARCH™ slot machine, the COMBO™ gaming concept and GAMOPOLIS™, a multigame series. Follow the link to play free slot games. 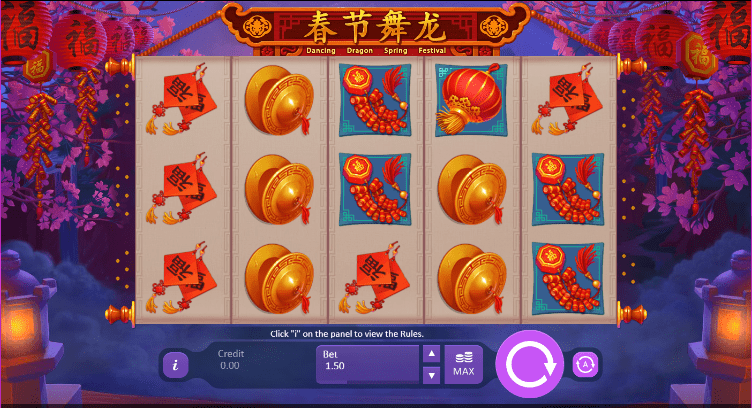 The pay by phone bill casino game is based on the spirit of Chinese New Year, in which dragons play a hugely important part. In Chinese tradition, the dragon is a symbol of good luck, and in this game, it is bestowing the same fortune on you. The music is oriental in theme and sounds straight out of an epic film track. The graphics are very royal and festive looking, with ornate details, glinting golds and bold reds.

The game’s other features include:

• WILD – this is the colourful dragon which will appear on reels 2, 3 and 4 and will substitute for all other symbols.

• SCATTER – this game has not one, but two scatters – the ying yang symbol and the Chinese temple. The temple scatter will appear on reels 1, 3 and 5 and the Ying Yang will appear on the rest of the reels.

• DOUBLE DOWN – this is a bonus feature of the game and a good chance to win some extra cash. During the game, if you score a payout of less than 10x the bet you placed, then hit the DOUBLE button at the side. A single card will be in front of you, face down, and you have to take a gamble and guess the suite and the colour of the card. If you are successful, you could be looking at 2x the gambled amount for the correct colour or 4x if you have managed to guess the right suite.

• AUTO SPIN – like most best online slots uk games, this game also comes with the auto spin feature. Select how many spins you would like and let the game do the work for you.

Dancing Dragons is an intricate and lavish game from Casino Technologies, that brings in a very traditional part of Chinese culture.

Whilst there are plenty of Chinese New Year themed slot games out there, this one certainly establishes its edge with its gorgeous graphics and colours, and the addition of the gamble feature. If you liked this check out Da Vinci's Treasure slot.