The fearsome Blackbeard, or Edward as his mother called him, remains the stuff of legend. The English pirate sailed around the West Indies and North American colonies in the late 17th and early 18th century, looting and plundering, stealing ships and engaging in all manner of piracy.

His name has now made it into our games section here at Megareel, as he is the focus of Blackbeard’s Quest, a piratical online slot. If pirates aren't your thing, check out our other free spin slots

Tom Horn Gaming have a rich portfolio of the best online slots games with plenty of slots online. Their repertoire includes video poker, table games, keno and bingo as well as their core speciality of online slots games.

Additionally, they provide cross-platform entertainment over mobile, terminal and desktops so it’s easy to pick up and play their games from anywhere, including slots pay by mobile phone. 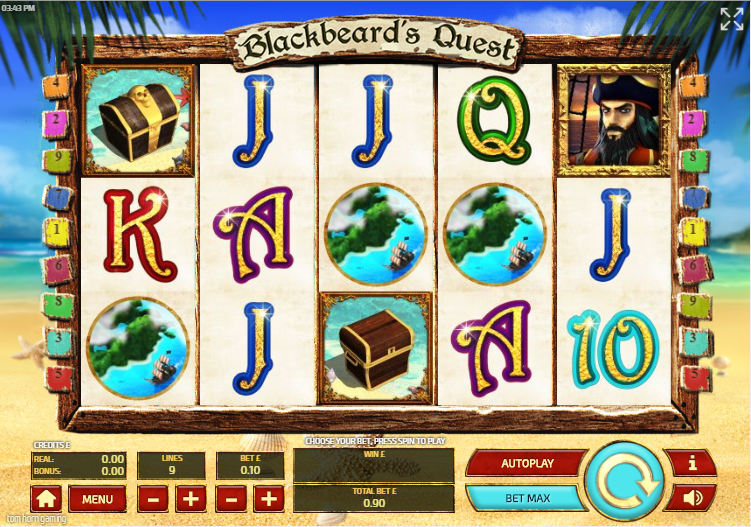 As expected, the pirate theme is all over this freeslotgames. The background finds you on a desert island, golden sand leading to a turquoise ocean that stretches out toward the horizon. Palm leaves lean in from above and a starfish can be witnessed lazing in the sand. The baseline audio is devoid of music and therefore surprisingly calm. You’ll find yourself listening to the wash of the waves, seagulls chirping in the distance and the gentle creak of an unseen ship.

The Gameboard features 5 reels, each 3 high with a variety of icons. The icons are on parchment which is housed in a driftwood picture frame. Nailed to the sides are the numbered paylines of which, sadly, there are only 9.

All bets are completely modifiable. The number of lines can be altered from 1 to 9 and the bet level begins at 0.02 and increases incrementally to 1.0, meaning a total bet can vary anywhere from 0.02 to a maximum of 9.00.

Once you spin the reels, the music kicks into gear, evoking everything from a seven seas adventure to a shindig in a port town watering hole. The icons are suitably themed and split into two categories of high and low values.

The low values are 10, J, Q, K and A: each symbol sparkles with a gold, textured effect and is bordered by a distinguishing colour. The high values feature images of a ship sailing around an island, a close up of that ship and a female pirate with a red bandana.

WILDS are the legend himself Blackbeard! They earn the player points for 2-5 matches on the Gameboard and can be substituted for any standard symbol. The SCATTERS take the form of 3 treasure chests; get one of each on the Gameboard to trigger 10 free spins. During free spin rounds, the SCATTERS become WILD and, generously, further free spins can still be triggered.

Blackbeard’s Quest takes few deviations along the treasure map to strike gold. Using a tried and true formula, it skins the classic 5x3 board with piratical iconography and, while adding little new in terms of gameplay, its vibrant visuals and absorbing audio means it can hold its own against many of its rivals. If you enjoyed this game, you must also give a shot on the Birthday Slot slot game.