Azteca Gold is a video slot that takes us to play free spin slots with Mega Reel all the way to Ancient Mexico - a time marked by amazing sculptures and alluring treasures. It’s game with 5 reels and 3 rows, each of them decorated by the sculptures and treasures in question.

Some of them can initiate some really rewarding bonus games that make this excursion back in time a potentially profitable one.

Leander Games are a developer who have a growing portfolio of free casino games, many of which boast some really impressive graphics. They like to play on original themes as well as some which you may have seen translated into slot games before with this Aztec themed video slot being an example of that.

Whilst Leander Games may not be one of the biggest names in the slot game realm, their catalogue of games is consistent and they are a company who have the ability to optimise performance across all of tablet, smartphone and desktop to make for an accessible play however you prefer.

Mega Games Universal Studio are the second developer behind Azteca Gold, and as their name suggests, they don’t hold back on production value and that comes across so often in their games. Azteca Gold may not be the most cinematic experience out there in terms of video slots, but it definitely packs some quality in the graphics department with some really detailed symbols on the online slots uk reels. 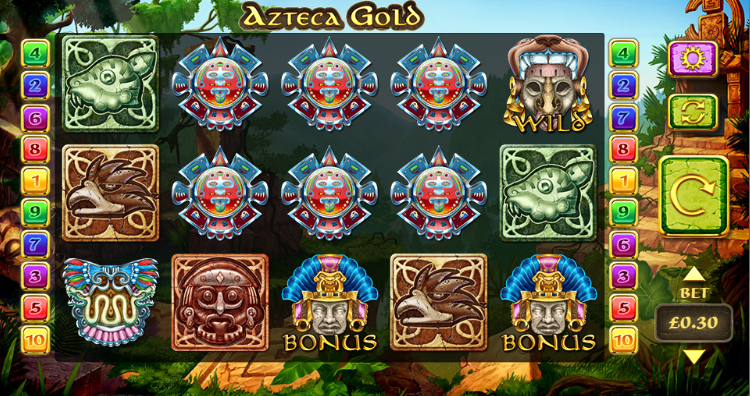 As mentioned earlier, the symbols ins this pay by mobile casino slot game are emblematic of the theme at hand with relics of ancient history providing the iconography on the reels. Some symbols are pendants, whilst others are made of stones, carved in a way that only the Azteca people could. Also, depending on which symbols we’re talking about, some of them can perform vertical stacks for more ways to win.

There’s a couple of bonus features here that will come from the standard gameplay as, with a scatter, a wild and a bonus symbol, the game reaches new levels of excitement. For example, landing 3 or more of the scatter symbol will trigger the Free Drops Feature. In this, there are cascading wins. Symbols will drop and should a winning combo be formed, those symbols will be removed and replaced with further symbols. This will continue, hopefully for a long time, until no wins occur - a really helpful and potentially high-paying bonus.

The other bonus in action here is a Free Spins round which is initiated by the bonus symbol which, incidentally, doesn’t look to different from the scatter but you’ll soon get used to it. 3 of them in a row lands 2 free spins whilst 4 of them will grant you a corresponding 4 free spins. 5 of them in a row will get you 6 free spins during all of which a maximum multiplier of 600x your stake is active. 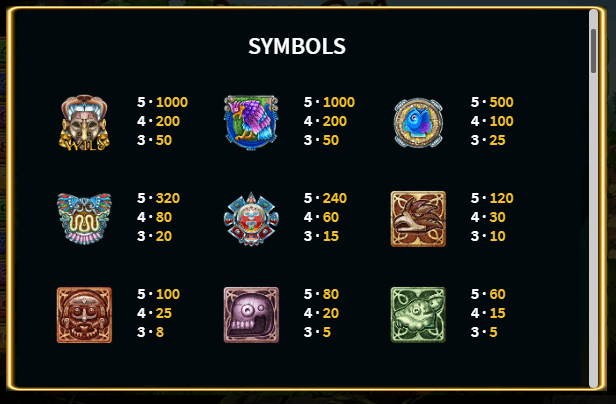 Azteca Gold is a good take on a theme that’s been done a few times before, but rarely with the attention to detail of the symbols on display. Simple gameplay and some attractive bonuses make for an enticing play. However, you should check out the company's other takes on this theme, such as the Aztec Secrets Slot.