Temple Quest Spinfinity is the perfect example of a great slots online game, much like many of our other free slots. Take the winning side when Heaven and Hell clash in Archangels: Salvation from Net Entertainment.

Battle amongst angels and demons in this stunning game that offers loads of bonus features and plenty of chances to win.

Net Entertainment are well-known within the gaming industry and have been around for over 20 years. Working with some leading providers such as 888.bet and Sky Vegas, they have over 200 free casino slot games to their name and have a global presence. They are fuelled by creativity, thrills and cutting-edge technology.

Alongside some of their popular games such as Asgardian Stones, they also work with other companies such as 20th Century Fox in producing new games such as Planet of the Apes. 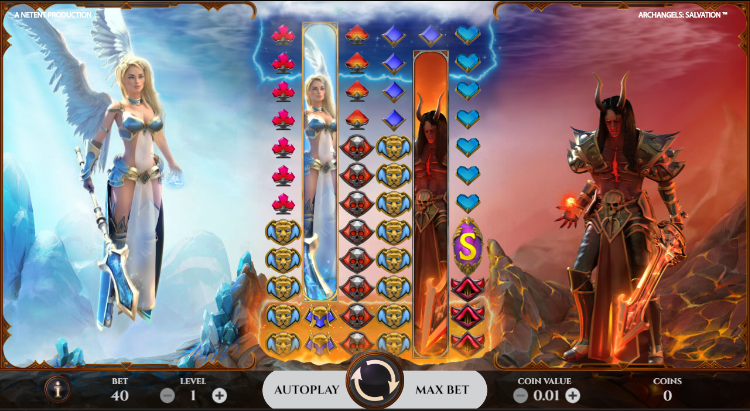 Archangels: Salvation is a 5 reel, 100 payline slot. Bets can be placed from 40p up to £200 a spin so check out this pay by mobile casino.

The reels are set against an atmospheric background of mountains and volcanoes. With good and evil visually represented in the colour scheme of celestial blue and fiery red, this is also shown with a hovering angel and a leering devil. Both are stood to the left and right with the battle commencing on the reels that lie between them. The soundtrack is an epic score which gets your heart racing.

Some of the game’s best features include:

* HOT SPOTS – this game hosts two hot spots, found in the two rows at the top and bottom of the screen. If a 2x2 wild lands in any of these spots, you can active the below two features depending on where it lands.

* HELL FEATURE – as above, so below. When a wild lands in the bottom hotspot, you will get either 8 or 16 single wild symbols, depending on if it’s a partial or full wild land.

* FREE SPINS – this will be launched by 3 of the scatter symbols (the embellished S symbol). Taking up 2 stacks on the reels, the scatters will award 10 spins for 3 symbols all the way up to 25 free spins for 6. 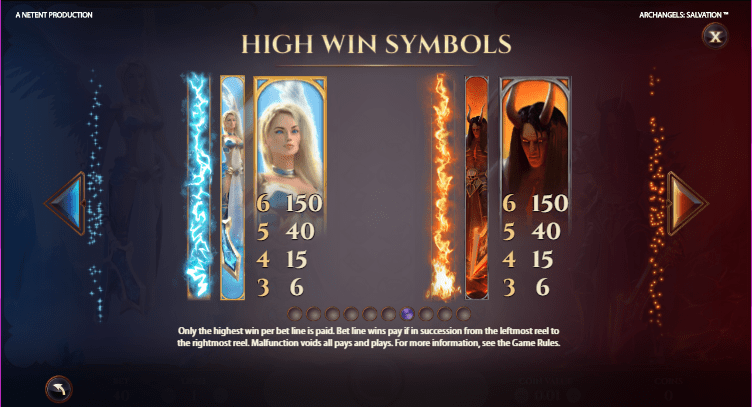 Archangels: Salvation is a stunning game in terms of the presentation and soundtrack. It also offers some really creative and original features which makes it fascinating to play. However, you can also try out Arcade Bomb Slot for a fascinating experience.