Released in March 2020 by Blueprint Gaming, Wonder of Ages is an epic five reel free spins slot with 20 pay lines which makes a great new addition to Mega Reel. Complete with five reels and 20 paylines, Wonder of Ages has a historical theme which really adds interest to the game along with being a fun take on the theme.

Wonder of Ages is playable from just 10p a spin on all compatible devices and it’s got a brilliant bonus which allows players to play four free spins features. That’s right - four! More than most if not all slots available to play online. Wonder of Ages free slot games has three progressive jackpots to offer and the RTP is 95 per cent.

This online slot has an epic bonus feature for each and every one of the historical times it represents. First off you can find the free spins feature for Ancient Rome, Ancient Egypt, Ancient Greece and the Ming Dynasty. Each of these has its own modifier too, and there’s also a jackpot feature which offers big cash multipliers and three progressive jackpots.

Blueprint Gaming - the Developers of Wonder of Ages Jackpot King

With some of the most creative games on the mobile phone slots market, Blueprint Gaming have been among the leading games providers to the online casino market for a while now. With a portfolio of diverse games, it’s no surprise you’ll find some of the best this developer offers at Mega Reel.

Blueprint Gaming are the makers of some of the most popular slots out there today, including Diamond Mine Extra Gold. You could even go as far to say Wonder of Ages is soon to be heading for iconic status. This online slot is the latest in Blueprint Gaming’s iconic portfolio which already impresses.

We can also offer more slots with this wonderous theme from several other developers, have a look at these slots: 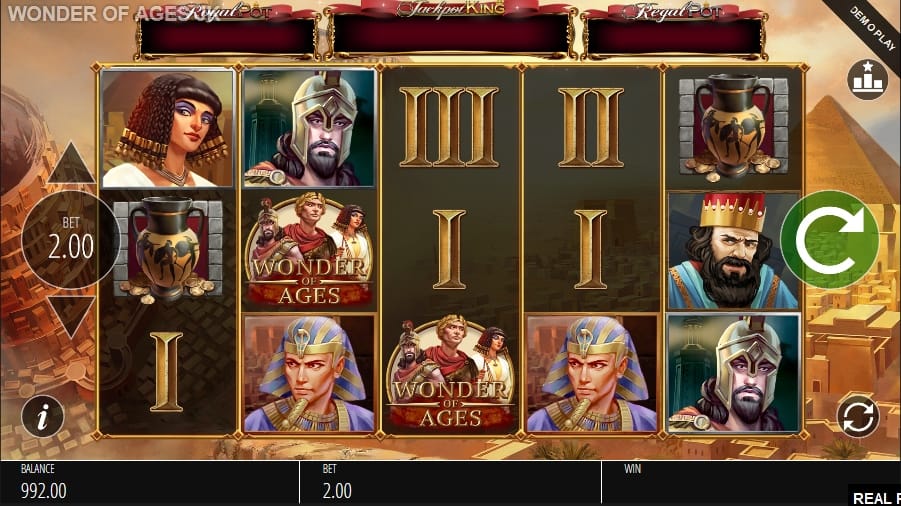 Set to a wonderful historical theme, the Wonder of Ages online slot game brings the ancient times to life. Go back to the glorious times of the Roman Empire, ancient Greece, ancient Egypt and even the mighty days of the dynasty. Epic gameplay is complemented by high definition graphics and ancient buildings in the background.

The symbols you can expect to find include Roman numerals I, II and III along with vases, and there are a whole range of ancient popular characters. We’re sure you’ll recognise these characters too, including Genghis Khan, a Babylonian ruler, Ramses, Leonidas, Cleopatra and Julius Caesar. Most rewarding is the Roman emperor which pays up to 50 times your stake for five.

Players can win with this game with a feature unique to its gameplay - two wilds is enough to form a winning combination. Wonder of Ages is playable from 10p to as much as £200 a spin and there’s also an autoplay function for players to make the most of. It’s got an RTP of 95 per cent too, while the max win is 10,000 your stake so sign up today to play online slots. 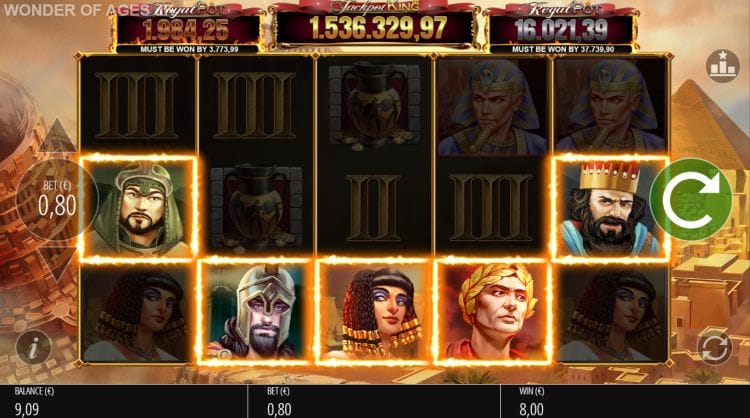 Wonder of Ages may be based on ancient times, but its bonuses and free spins are anything but. You can win 10 times your stake by landing five different characters on any pay line, and that’s not all. Look out for the wild symbol with this online slot game, which is by far and wide the most valuable symbol.

The wild is important for all slots at Mega Reel, but with Wonder of Ages it definitely goes one better. It not only replaces all other symbols, with the exception of the scatter, but it will reward players up to 500 times their total stake too. 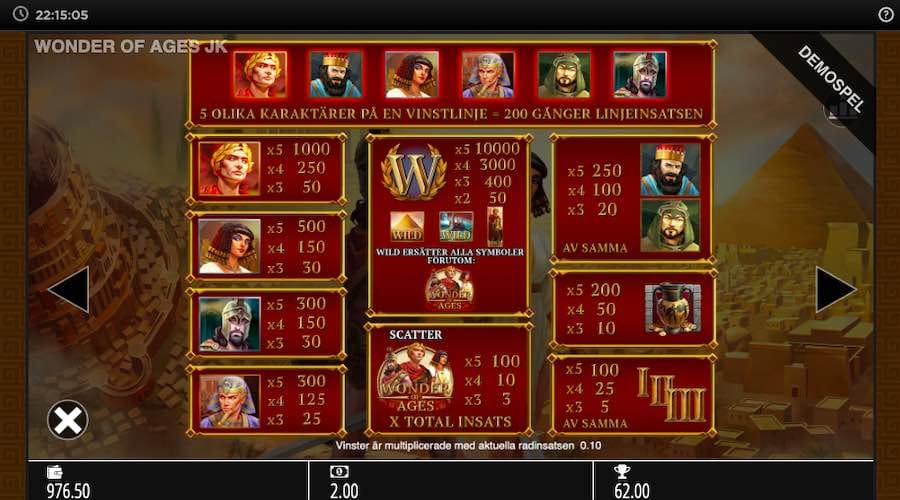 Wonder of Ages is a great online slot which can be played from all devices. The ancient themes have been put to good use with the bonuses too, which you can really get the chance to win big from. We highly recommend Wonder of Ages slot game. Why not check it out Mega Reel today and see what you think about some of our other slots, like the Wild West Zone slot?