Get ready for a seriously epic adventure in this 5-reel, 25 pay line, ass-kicking, action- packed online slot game from the one and only Yggdrasil. Take a trip down to the depths of hell where a battle is raging between the ferocious Vikings and maybe you will come out alive and with some real cash prizes for your troubles. Discover more games like this one with Mega Reel.

This slot game from Yggdrasil features absolutely stunning graphics, and epic and immersive audio which heightens the adventure and is an all-round excellent online slot game. As the title suggests, this game is set in Hell and we see the rocky peaks of the devil’s lair, with fire visible through the rocks and the gloomy fog of the landscape. The reels are built on the metallic gates of hell with the devil carved out at the top. One the reels we meet the fearsome Viking characters which come to life and fight for positon on the reels which is a very cool feature of the game. Their weapons also feature on the reels which include hammers axes and swords. Every part of the game is beautifully depicted and the attention to detail is what makes this amazing slot game so stunning.

Yggdrasil are a developer that stands out for the super high quality of every one of their games. This Malta based company have one of NetEnt’s former CEO’s at the helm so the wealth of experience, knowledge and success that he brings has bound to have had huge impact and judging by their slot titles, it most certainly has. They focus on creating advanced and impressive slots and go for quality over quantity. To see what we mean check out Beauty and the Beast, Alchymedes or Jungle Books. Click here to find new casino slot games. 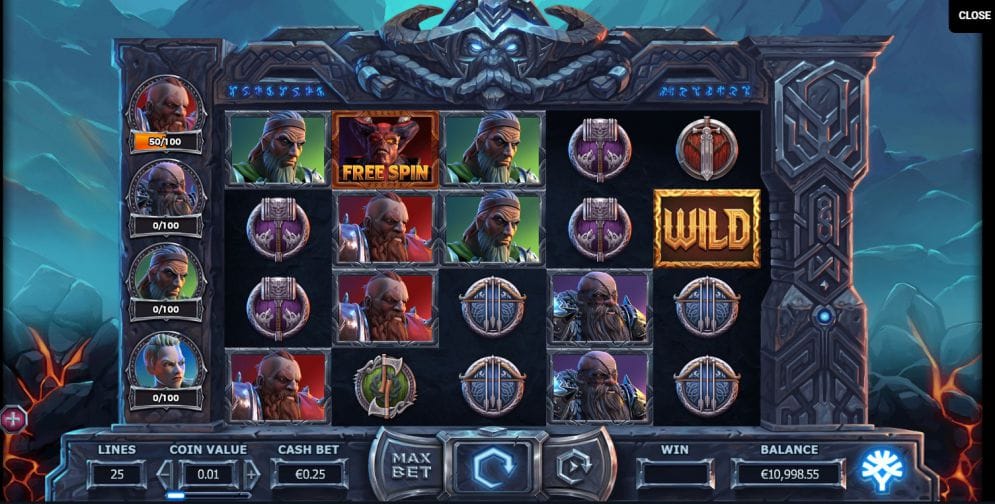 This game has loads of cool features that you will love, so check them out and start playing right away.

First up is the free spins feature. This devilish symbol landing 3 or more times on the reels will land you 7, 12 or 16 spins. If you land two free symbols, the demon is summoned to fight the Vikings. If you win, rage and wilds are triggered. A re-spin is also triggered with 2 free spin symbols, and wilds are sticky for this feature.

The berserk free spins feature is activated when you collect rage from defeating demons in the fights and collecting treasure chests. Filling the rage meter awards 7 level 1 free spins. Vikings in this mode will always win against demons.

There are two levels of free spins, one in which you must fight the lord of chains and the other you must fight Lucifer and there are different rewards in each.

If you land a treasure chest on reel 5, you are awarded a stone tablet. Each of these tablets reveals a reward including free spins and random wilds. 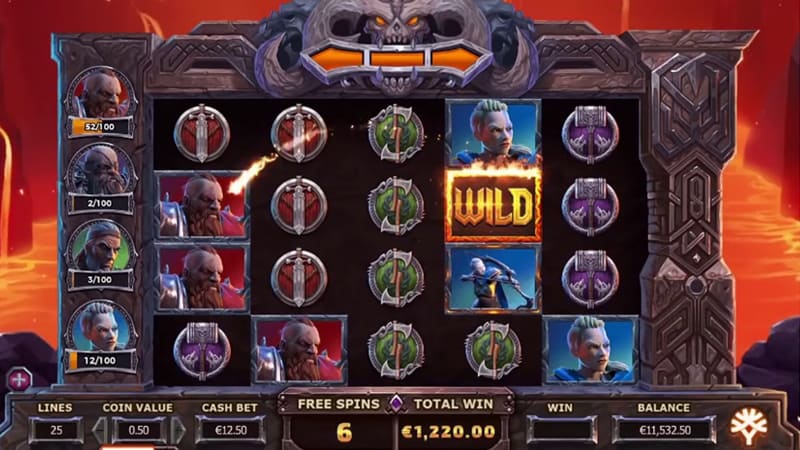 This mobile slot is nothing short of amazing. It has the graphics and gameplay of a full on video game and you will struggle to stop playing. Also try a similar game - Viking Fire.