Cactuses wrapped in fairy lights, guitars wrapped in tinsel, tequila for a present – this is Christmas in Mexico, and the Taco Brothers are here to save it! This is a Christmas spin on the traditional Taco Brothers free slots –it’s got a cute festive vibe with a bit of an edge.

Who wants to spend another dreary Christmas in blighty? Let’s take off to Mexico, where the beaches are beautiful, the food is great, and the Taco Brothers give you tequila at Mega Reel!

The creative and passionate Elk Studios brought Taco Brothers to the online casino world, and as their Christmas present to you, they put a festive spin on that much-loved freeslotgames.

They’re innovation and combination of data-driven games and algorithms mean they’re bringing out games that will stand the test of time. Why not try out their original Taco Brothers game, or Wild Toro their award-winning game of 2017?

You’ll play on the backdrop of a small Mexican town, with snow falling from the sky, and some festive jingle music in the background. The mobile casino game provides 243 ways to win, so you could come away with some serious loot – arriiiiiba!

Much like the original, you’ve got the three Taco Brothers, Paso, Pepe and Pico, and you’ve got Captain Diaz who’s trying to lock them up. Then you’ve got the symbols of the cactus, tequila, lantern and spade, a safe, and a guitar – but this time they’re wrapped up with a Christmas twist. Paso is the highest value symbol, awarding 400 coins if you get 5 on a payline.

Taco Brothers Respin – triggered with the Taco Brothers online slots wild symbol, and gives you a free respin on any of the reels that don’t currently have a safe or a Taco Brother symbol on it.

Wild Escape Bonus – triggered if you get three safe symbols on reels 1, 3 and 5. A bomb will then reveal what multiplier you get for that round– up to 3 times.

Running Wild Bonus – when all brothers appear on reel 5 acting as a wild, this will trigger the Running Wild bonus (free spins). They work across the reels until Captain Diaz turns up and starts to lock the brothers up. His daughter, the Señorita also appears and releases the brothers (talk about a conflicting relationship!). You’ll keep getting free spins until either the Señorita has managed to free all of the brothers, or the Captain has managed to lock them all up. So it doesn’t really matter what happens to the brothers – you win either way! 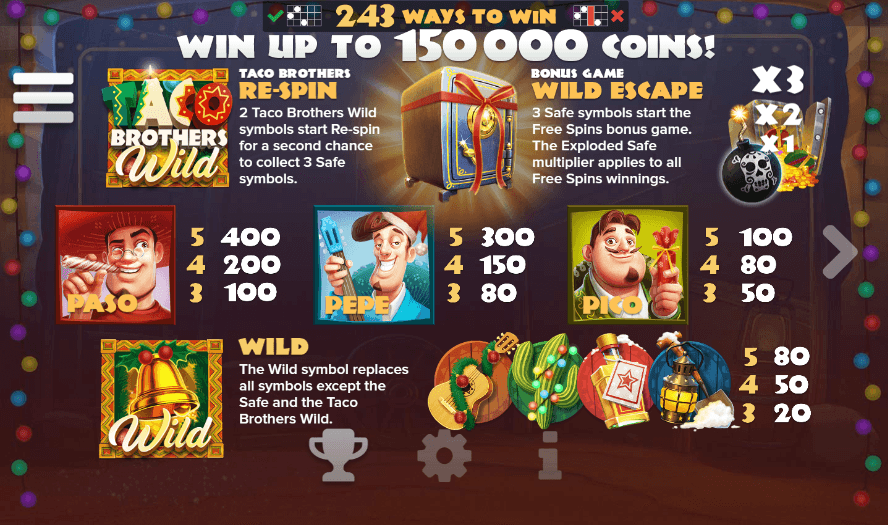 An aesthetically-pleasing twist on the original, Taco Brothers Saving Christmas is a fun a festive slot game that offers loads of ways to win. The original game is a medium variance game, however Elk Studios upped the anti with the remake, and has put in a higher variance category – meaning users won’t win a lot, but when they do win it’s a high amount.

This makes this slot game all the more rewarding. You may also want to try Taco Brothers slot or any of our other casino slots!