All gather round, and prepare for the worst, the most beautiful creature in the universe! Here he comes, the one animal who never forgets. There is no need for binoculars. With Eyecon's Stampede free slot spins, you can get up close with these magnificent majestic beasts! You will not need to check for tusks, these elephants are African to the core. Giant creatures with long white tusks!

‘Stampede’ is a 5-reel, 243-available pay line slot game set in the African savanna! The savanna is a mix of woodland and grassland area. It is an ecosystem which is characterised by its wide spacing and open canopies. In Africa, these savannas are inhabited by some of the world's most unique creatures, great and small!

This includes the zebra and the African rock snake. But, our favourites are the lions, giraffes and the gazelle! These animals exist in no other part of the world. This is what makes Africa such a beautifully unique place! So sign up now and play free slot games today!

The developers of this game are pay by mobile casino gaming engineers, Eyecon. They are an established developer, who is hoping to add ‘Stampede’ to their long list of popular games. They are most known for creating unique stories with exciting online slots gameplay. They were founded in 1997, in the lovely city of Brisbane Australia.

Some of their most popular online casino slot games include:

Striker Goes Wild. Send the referee, this strike has gone absolutely insane! Goals and gold can be won in this extraordinary football-themed online casino slot game.

Lucha Rumble. Ding-ding. Lock up, and get ready to get down and dirty with the athletes of Mexico's luchador wrestling scene. Jump and flip from the robes, slide and kick! Win the prize money!

Vlad's Castle. He 'vants to suck your blood! Escape Vlad's castle, Transylvania's second most famous count! Bring some garlic bread and your grandma's rosary beads. This could get dangerous.

Check out the MegaReel platform for this title and others from Eyecon to play online slots, such as:

But can Stampede match Eyecon's premium standard of online casino slot games? Read on and find out! 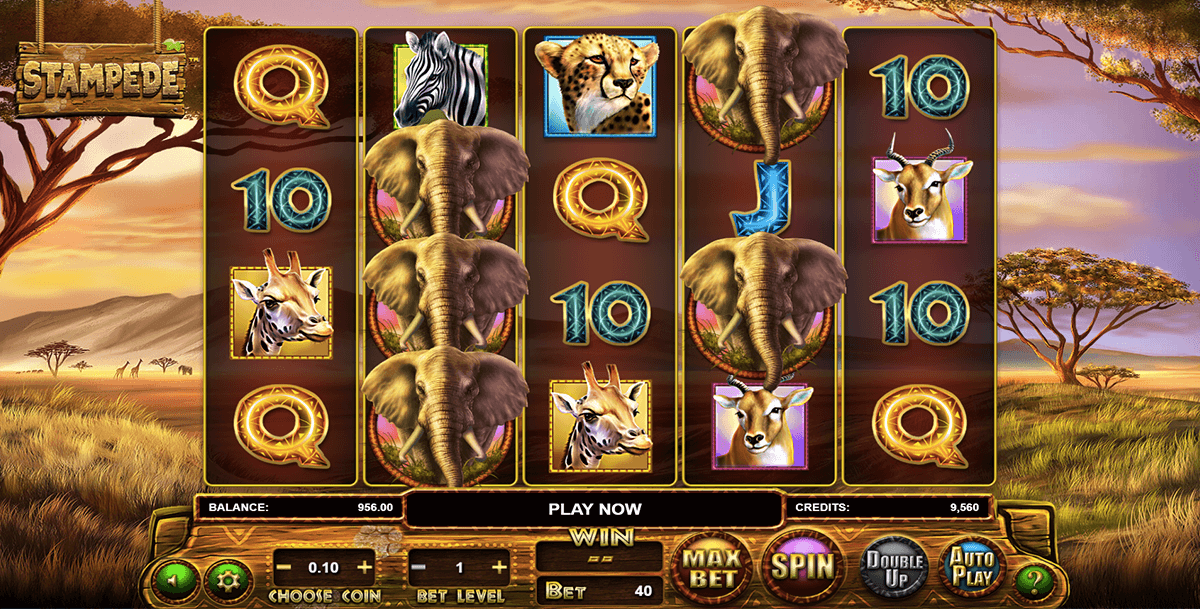 Stampede is set in the African savanna. In this game, you will journey through an exciting African narrative. This game will quench the thirst of any traveller. A bonus is, this game can be played for a lot cheaper than a return ticket to Africa!

Some of the symbols in the game include iconic African animals. This includes noble horses, rhinos, buffalos, antelope and, of course, majestic elephants! These images are beautifully illustrated. It is clear a lot of care has been put into creating a visual display which is pleasing to the eye. We also loved the alluring background of the slots game. The image is crisp and shows a colourful savanna. Native animals are wondering in the background. The colour pallet is stunning. Rich pinks, purples, greens, yellows and blues. This game has beauty dripping off the end of its trunk.

The background music is subtle but powerful. peaceful African drums play, with the distorted sounds of the savanna behind it. When the reels are spun, the drums become louder and more energetic. This had us dancing around the office like we were having a ritual.

Set your coin value from 0.01 to 1. The levels can be set from a multiplier of 1 to 5. In addition, you may wish to let the gameplay itself by selecting the autoplay feature. Players can select the number of rounds played in this feature. Leaving you no reason to pack your trunk and say goodbye.

The game also uses well known online casino slot features, such as the WILD and SCATTER symbols. In Stampede, the hot African sun is your WILD. This fiery scatter can substitute for all symbols within the game, bar the SCATTER symbol. The unforgettable and never-forgetful elephant is the SCATTER symbol.

This symbol is beautifully composed. It even animates when landed, it is a really beautiful aspect of the game, which we enjoyed. Should you gain 3 or more SCATTERs, the game will automatically trigger the FREE SPIN BONUS. As implied, this gives you a number of free spins, allowing you to rack up the credits, spin-by-spin! Within this bonus round, you will be given a selection of free spins to choose from. 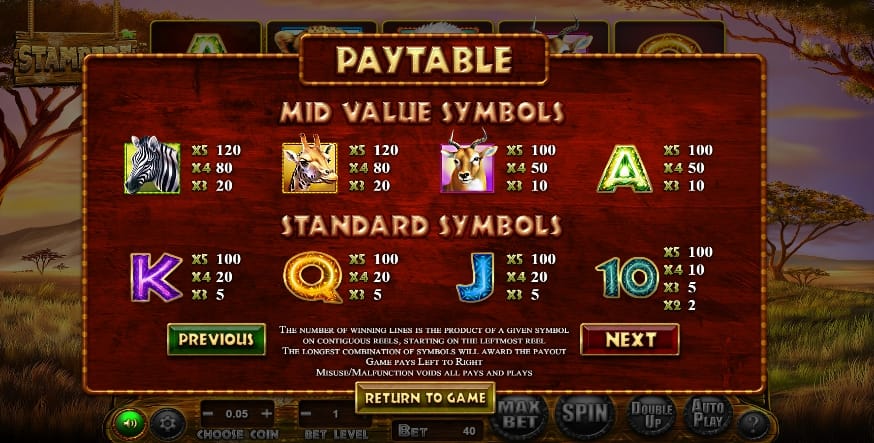 You will want to be stomped into the ground after playing Eyecon's fantastic creation, Stampede! After raking in credits, you will be spraying water from your trunk as you have just won the F1! Anyone who likes animals will enjoy this game. And, do not worry there are no poachers in this fabulous game! Just hungry gamblers with African coins in their cross-hairs!

Everything in this game is impressive. The sounds, music, visuals and gameplay. This might be one of the best online casino slot games we have ever played.

No elephants were harmed during the creation of this game.

Enjoyed Stampede? Try Stage 888 slot for your next big win.